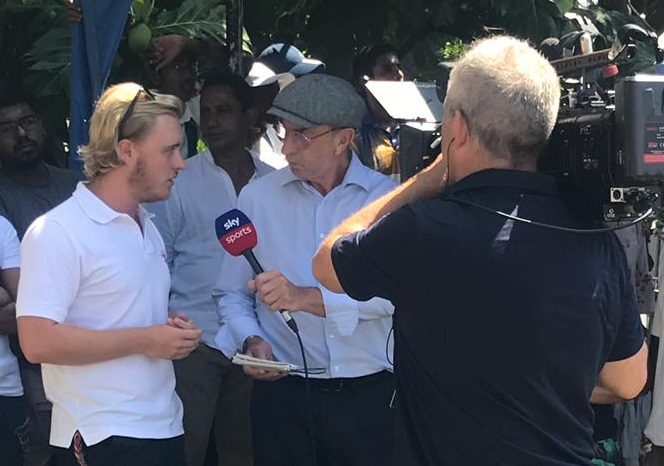 Former student Chris Millard is leading over 33,000 England fans at the Cricket World Cup in the UK.

The Barmy Army, now in their 25th year, initially started as a group of backpackers travelling to see the team before breaking out into the cult phenomenon that it has become today.

Chris, who is a childhood friend of England star Joe Root, took over the role of the Army’s Managing Director 18 months ago. We caught up with him recently to find out about his journey with the Barmy Army.

“I joined The Barmy Army in the second year of my course on a placement. I was doing a sport marketing module at the time which inspired me to choose a sports business placement”.

“Because of that I was able to gain £20K in sponsorship for The Barmy Army whilst on the placement, which was pretty amazing.”

After his placement, Chris went on to work with The Barmy Army balancing his work and his studies, something he was supported with by his tutors.

He said: “I had a really good relationship with the tutors on the course – they were a big part of the reason I chose Leeds Beckett after meeting them on the open day.

At 24, Chris is now responsible for leading the organisation and its 33,000 members, seven staff in the UK and up to 20 staff on tour.

Chris explains: “The biggest challenge for me personally was rebranding The Barmy Army. In my final presentation for my dissertation I proposed a rebrand, so the idea came from my time at university. The rebrand was challenging, as we removed the St. George’s flag from the logo.

“I think we are reaping the rewards of that now, it is helping us expand as a business and reach a wider network of England fans.”

“We are keen on making sure that people understand our ethics, and that we’re not seen as a boisterous fan group – there is a code of conduct. It’s a friendly way of supporting but also passionate and unconditional.

Since graduating, Chris has returned to Leeds Beckett to support students in various ways.

“Since leaving Leeds I’ve been back to help deliver a module for the sport marketing course on The Barmy Army.

“My placement offered me such an opportunity that ever since working for The Barmy Army full time I’ve always employed placements and have had several from Leeds Beckett. There is so much value in it for both employers and students – I know that as I’ve seen both sides of it”

And on Chris’ hopes for this summer of cricket? “I’m still hopeful England will get to the final and win the World Cup – we’re the supporters group so we’ll always support the team through thick and thin.

“I just really hope that the nation rallies around the England team and that cricket can capture the nation like the football did last year.”