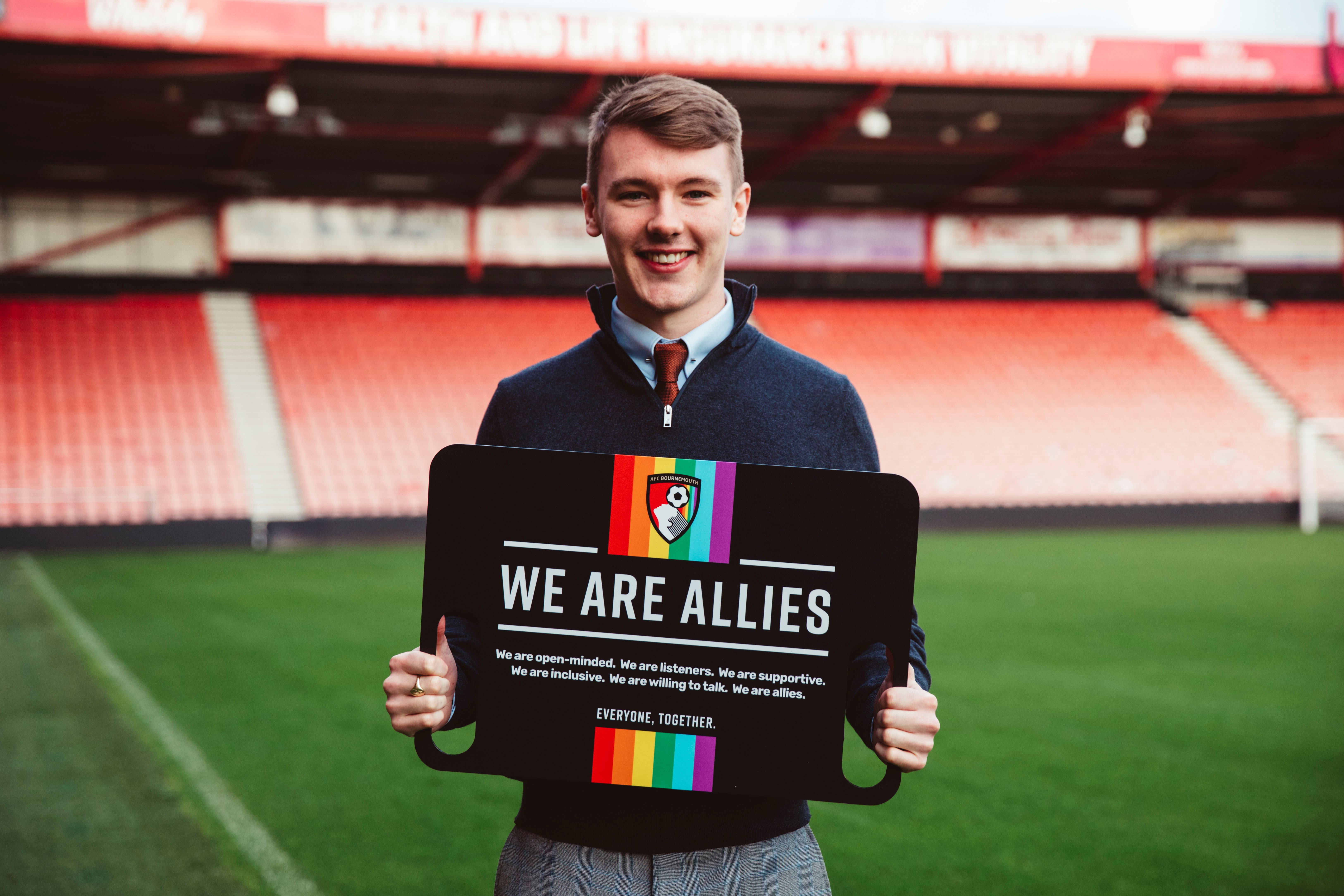 Fraser Read, who graduated from Leeds Beckett in 2019, has swapped studying in the classrooms of Headingley Campus for a role marketing a major name in English football.

After studying Sport Business Management at Leeds Beckett, Fraser moved straight into a role in the marketing team at AFC Bournemouth. He let us know how much of an impact his time at Leeds Beckett – and his own hard work – played in him landing the role.

“The course was exactly what I wanted and what I needed to go into the industry. Each module throughout the three year course was completely different and that stood me in good stead. I think the best thing about the course, and the university as a whole, is the amount of guest lecturers and industry professionals they connect you with. It’s so important to have that knowledge of the industry before you begin your career.”

Fraser’s journey with AFC Bournemouth started before he headed up to Leeds, and it was his own persistence that initiated some of the important relationships in his early career. “As a child I played every sport I could and, as most youngsters do, I wanted to be a footballer. By the age of 18 I had realised that was not going to be possible, but I still wanted to be in the sports industry in some way.

“My journey with AFC Bournemouth started in my final year in sixth form. I listened to an inspiring talk from my now boss and club commercial director Rob Mitchell. After the talk I emailed him to ask about potential work experience. After three or four emails he eventually gave me an opportunity to complete a week of work experience with him. I loved being in that environment and seeing the work that went on behind the scenes at a football club.”

Aiming to continue his journey in the sports industry, Fraser started looking for the best course to study, and soon found there was only one option for him. “I knew when applying for university that I wanted to do Sport Business Management and there were only a handful of universities that provided the course. I looked round some really impressive campuses across the country but once I got to Leeds I just knew that was the place for me.”

Fraser realised that although he was in the right place and studying the right degree to get where he wanted, it would take more than just his degree to secure his goals and ambitions. “A lot of undergraduates and recent graduates expect to secure positions based upon a degree alone but fail to put in the work to truly understand the industry they want to enter. It took me four years of hard work, both studying and trying to get work experience before I landed my current role.

“While I was studying at Leeds Beckett I continued my contact with Rob Mitchell at AFC Bournemouth, bringing him ideas each time I was home, illustrating what I had learnt and how that could benefit the club.

“During my final year he introduced me to the new marketing manager at the club, Dan Buckley. I pitched my ideas and content to them and they worked out a way to create a role for me at the club once I finished studying.”

In his role at AFC Bournemouth, Fraser uses the skills and knowledge that he gained at Leeds Beckett every day. “I think university taught me how to research, generate ideas and stay ahead of the pack. A lot of marketing and sponsorship, especially within sport, tends to be a simple regeneration of an old idea but university has given me the tools I need to be able to build fresh campaigns with new ideas that can take the business further than it has been before.

“All of my seminar tutors and lecturers played their part, but there were two key people who played a key role in helping me to develop those skills, Dr Alexander Bond who was my course leader for the three years and Kacy Mackreth who was my dissertation tutor in my final year. They both supported me and helped me to fulfil my potential which I am extremely grateful for.”

AFC Bournemouth have enjoyed a rapid rise up the leagues meaning that the corporate side of the club is smaller in scale than their competitors. For Fraser this means a varied day-to-day life. “I cover the marketing activity for the entire club including retail, hospitality, ticketing, and commercial sponsorships. Typically, I focus on the day-to-day campaigns with a specific responsibility over the commercial area of the club – creating activations for sponsors and supporting the commercial team with prospecting and idea generation.

I love seeing my ideas come to life. My role is a very creative one and a lot of bad ideas are thrown out before a good one comes along but there is nothing better than coming up with a concept and then working with the relevant departments to create something that the supporters really engage with.”

In his career so far, Fraser has developed an understanding of the club and how important that is in how he works in his role. “AFC Bournemouth have so many great attributes, but I think the sense of community is probably central to everything we do. I believe that it is hugely important to listen as a marketer. You need to be able to tap into your customer or supporter base to understand what they believe the brand represents. There is no use in me marketing AFC Bournemouth as the biggest, most successful club in world football because that isn’t the case. We are however exceptionally dedicated to our community and that is something that I believe we do better than most and is worth shouting about.”

Fraser’s successes have come from his passion for the industry, his desire and motivation to build connections, and a strong industry related degree that allowed him to build his experience around his education. “I think placements are the only way to prepare you for working life. As much as my studies were integral to understanding the landscape of the sport industry there is no substitute for experience. If you can secure a placement, even if it isn’t doing your dream job, I would thoroughly recommend it. Completing a placement gives you a sense of the realities of work. What you might think is possible in concept will be truly examined when you are in the working world and it’s that kind of insight that you need to progress quickly once you begin your career.

“I would also urge students to build their network of connections as early as possible too. Having contacts within the industry that you can draw on for advice and support is key to navigating your career.”