At Preston Park Museum and Grounds, just outside Stockton-On-Tees in the North East of England, we have focussed our efforts towards exhibiting our own criminal history collection. The museum recently acquired a sizeable donation from the local regional police force, Cleveland Police.

This led to re-developing our mock police station and Victorian Street with plans to develop this valuable source of historical material, making it more accessible to the general public.

A selection of objects from the handling kit used by costumed interpreters, including a figure of eight handcuffs, an early knuckle duster and a Metropolitan whistle.

The criminal history collection has previously been largely unseen but, with the help of volunteers, historians and students, we have been working to change this, having accessioned (formerly transferred objects to our collection) and documented the collection over recent months. Over this period we have been actively growing our collection so that it could soon form the focal point of a range of exhibitions. The aim is to develop new techniques for providing interpretation for the public, with the newly acquired material right at the centre.

The collection comprises over 300 items, ranging from archive material such as official notices and certificates, to police paraphernalia and handling objects such as uniforms.

It will primarily be housed in the museum’s Victorian police station, hopefully providing a fitting illustrative platform, with period surroundings and costumed interpreters illuminating the meaning behind the collection. The majority of the material within the collection typically originates from Stockton-on-Tees, the nearby historical market town and local council authority. Due to the regularity of changes within county boundaries and police jurisdictions in the 20th Century within the region, items have also been donated from a wider area encompassing Cleveland and modern day Teesside, and as far afield as the North Riding of Yorkshire.

Costumed interpreter outside the Victorian Police Station with visitors.

Costumed interpreters on the Victorian Street.

The archival and less durable objects have been accessioned and given a home within the main store at the museum, and these include some fascinating pieces of Teesside’s historical criminal past. One in particular is a mug shot book believed to be from the North Riding that dates to 1878-1896.

The term ‘mug shot’ originated in the early 1840s with the onset of photography and its application became standardised by regional police forces in the 1870s, leaving us with a wealth of documentation.

Conservation work due to be carried out on the mug shot book, combined with high resolution digitalisation, will mean that displaying the album is a viable option, and the museum plans to provide regular access to the digital format all year round. The museum faces funding issues along the way and is exploring methods to fund the digitisation and further conservation of the mug shot book, in addition to the preventative conservation work and the acquisition of a table-top display case. This may involve using a kick-starter campaign to raise funds to produce high resolution reproductions of images within the book.

A selection of images from within the book, dating from 1883 to 1894. If you look closely, you might see a resemblance running throughout the bottom row. 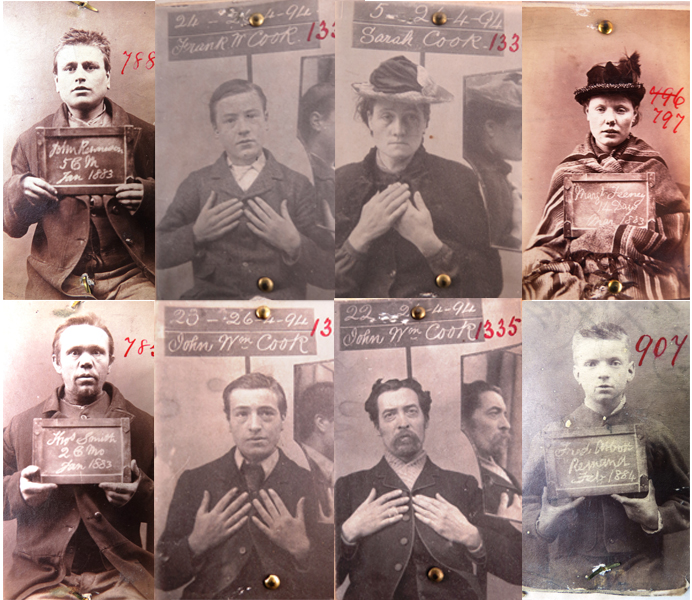 Handling objects, in particular, have been a focal point for the museum’s various collections since its £7m redevelopment in 2013. It will again be at the centre of the thinking behind promoting our local criminal history going forward, engaging younger visitors.

Over the past decade, television programmes such as Who Do You Think You Are? and Find My Past have become popular platforms for turning historical research into entertainment, by combining celebrity intrigue with the ease of access to a resource consisting of tangible, expressive material that is easy to interpret and exhaustively documented.

Television has taken to working with social (and criminal) archive collections because they are a rich resource of documentary material that lends itself to all sorts of storytelling exposition on the screen. Museums have begun interpreting this material for the public more conspicuously because of its wider interpretive potential. When material is synchronised from different mediums it is possible to cast light upon and interpret human stories that might otherwise have been lost or overlooked.

It will be the aim of the museum to build an array of stories for the public by cross-referencing material from the collection with a range of previously available documentary and archival sources.

Costumed interpreters carrying out a handling session with the public.

One such case is that of the Cook family from Middlesbrough, pictured above in the museum’s mug shot book, whose misdemeanours were documented in the Friday 6 April 1894 edition of Daily Gazette for Middlesbrough and deposited within The British Newspaper Archive.

Father John William and mother Sarah Ann, along with their sons John William and Frank William Cook (19 and 16 respectively), were arrested and charged with two cases of housebreaking and the subsequent theft of goods. In the first case, goods to the amount of £8 17s 4d had been stolen, including a lady’s gold watch, when John W. Mitchell, an engine driver and occupier of the property, had left the house vacant between 2.30pm and 10.30pm. A Mrs Dilworth of Somerset Street also testified against the Cooks, claiming that her house was ransacked in her absence, with goods to the value of £2 stolen, including a pair of boots.

Over the last ten years it has become apparent that studying one’s past in documentary form is a very popular pastime, with many people making use of public records now available with much greater ease due to initiatives such as the recent mass digital collaboration between the National Archive and www.findmypast.com to conduct research in their own home. Popular websites such as www.ancestry.com are making this possible by offering a one-stop resource with access to a range of different types of records across all types of platforms and devices. The exhibitions resulting from this donation will attempt to cast light on society as a whole during this mid-to-late Victorian period, in addition to providing insight in to individual cases, and telling real human stories in the process.

The archive is a rich source of research material, and in-house researchers will be afforded the opportunity to analyse and cross-reference it with national and local newspaper archives, with the aim of increasing the museum’s understandings of the archiving processes used by region’s police during this time and the relationship between the law and the various class systems of the Victorian era as a whole.

Victorian mug shot book being photographed at the museum 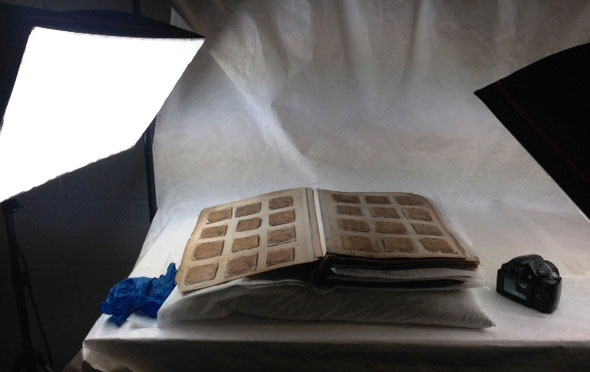 Should your museum be lucky enough to have a mug shot book in your collection, you might wish to join in with this movement to interpret previously under-represented human stories, as other exhibitions showcasing criminal history collections are appearing across the country.

Preston Park intends to use the human interest involved in such intimate material to form a pro-active approach to raising awareness of its criminal history collection. We have a presence on Facebook and Twitter and over the coming months, as the objects are transferred into accessions or handling collections, we will post snippets from behind the scenes.

Check us on online for the latest project developments: