Canterbury Prison: Making Sense of It's Past and Imagining Its Future

The former HMP Canterbury still looks much as it did when it was decommissioned three years ago. The addition of flowers and benches outside and the clean, shiny new appearance of the gatehouse give off a more cared for feel, but these are the only real signs of its purchase by Canterbury Christ Church University. 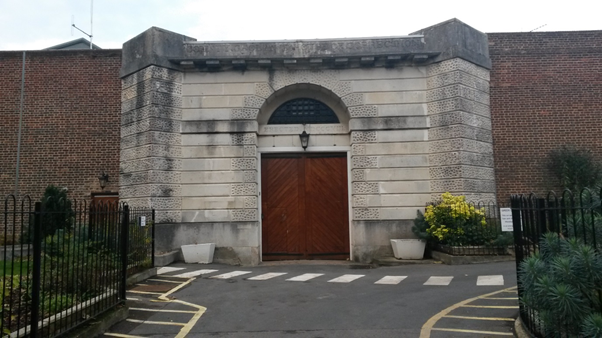 Canterbury Prison Gatehouse constructed in 1808 to the design of George Byfield and now a Grade II listed building.

Behind the walls there has been some minor activity. An archaeological trench now disturbs the former exercise yard, searching for Roman remains beneath. But no significant redevelopment has begun. It is not only the wheels of justice which turn slowly; planning applications, too, take time. The wave of prison closures which took place in 2013 included eight institutions built in the nineteenth century or earlier, and these sites clearly constitute a significant part of the legacy of that great Victorian carceral project which represented the birth of the prison as we know it. As the government announces its own prison construction programme, focused on “modern, suitable and rehabilitative” facilities situated away from the “prime real estate in our inner cities”, the fate of these “relics from Victorian times” hangs in the balance. In this two part blog I offer some reflections on the University’s plans for redeveloping Canterbury’s former prison site and the opportunities and challenges this presents for making sense of its penal past.

Proposals for redeveloping the site have been eagerly awaited, not least by me, and are now beginning to take shape. Last year, in anticipation of this, myself and a group of fellow crime historians organised an event to explore the opportunities presented by an historic prison falling into the hands of a higher education institution thanks to funding from the School of Law, Criminal Justice and Computing (Canterbury Christ Church University), the Centre for Culture and the Arts (Leeds Beckett University) and the Faculty of the Arts and Social Sciences (University of Hull). One key area of focus, leading on from a previous event on penal history held by the research network Our Criminal Past, was to discuss some of the considerations that were necessary to ensure the difficult history of such a total institution was examined in a manner that was both sensitive and critically aware. The Canterbury event bought together an eclectic mix which included former prison staff, experts in penal history, representatives from the heritage sector and visual artists.

The day opened with a brief overview of the two hundred year history of HMP Canterbury followed by an informative, and sometimes troubling, discussion of Iain Clover’s twenty-year career there, during which time he was heavily involved in suicide and self-harm prevention as well as violence reduction. This included a vivid account of the rapid closure of the site in 2013 and the effect of this on both staff and inmates. Stewart McLaughlin, also a prison officer and voluntary curator of Wandsworth Prison Musuem, spoke of the development of that project and the myriad difficulties encountered in trying to operate a voluntary museum on the site of an operational prison. Angela Sutton-Vane followed this up with an account of her work as part-time curator for the historic collections of Devon and Cornwall Police, as well as her current PhD research exploring police murder archives as texts and artefacts. In this she raised pertinent questions about the contemporary role of museums. Part of their purpose, Angela argued, involves expectations that they will meet multiple social and educational aims, and she reflected on the ways in which this can be achieved, as well as the challenges of doing so.

The final panel of the day turned to representations of penal history and began with a discussion of the work of visual artists Jane Hoodless and Pandora Vaughan, both of whom draw heavily on themes of crime and punishment as inspiration for their work. Jane focused on the use of objects associated with crime, including a set of plates emblazed with images of poisoners, while Pandora focused on the spacio‐political view of environments and the confinements inherent in designed space, a subject all too relevant for a consideration of carceral institutions. Both reflected on the challenges of incorporating multiple interpretations within their work and the ethical considerations of producing art so closely associated with criminal themes. Finally Professor Alyson Brown presented an analysis of the development of prison tourism in Britain which concluded by highlighting the tensions involved in producing balanced, objective representations alongside more popular depictions, both of which rely to some degree on an unsustainable view of the prison as neutral or apolitical. Alyson argued that instead a more ethical and multi-perspective interpretation within prison museums is necessary to uncover the multitude of narratives associated with the history of such institutions. 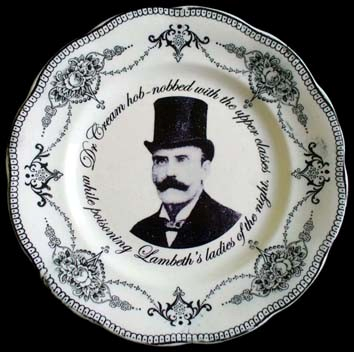 Time has passed since that day and the topics raised gave me much to think about as I awaited the University’s announcement of more concrete plans for their newly-acquired prison. An initial idea of converting listed cell blocks into student accommodation has been rejected and instead the development plan outlines the construction of two buildings on the former prison site. The first will replace the un-coordinated mass of twentieth century structures at the back of the prison, including workshops, a chapel and a gym, with a multiple purpose educational facility containing specialist amenities for science, technology and health. The area within the original prison walls, which contains the majority of the listed parts of the site, is to become The Hub. This will comprise sections designated to the provision of student services, and will involve the addition of new structures as well as adaptation of existing parts of the prison. The oldest buildings – the octagon which originally housed the prison governor and Cell Block A, part of which was constructed in the 1840s – will become a museum and gallery. The University is keen for this to include a range of public facilities and the focus will be the wider history of the campus, which comprises part of a World Heritage Site located between Canterbury Cathedral, St Martin’s Church and St Augustine’s Abbey. The archaeological and ecclesiastical significance of the area will be emphasised within the museum, along with its more recent use as a penal institution. The proposed plans preserve the structural significance of the long corridors and the monotony of regular cellular division. Some cells will be maintained, whilst other areas will be opened up slightly to provide room for educational visits and scholarly activity. 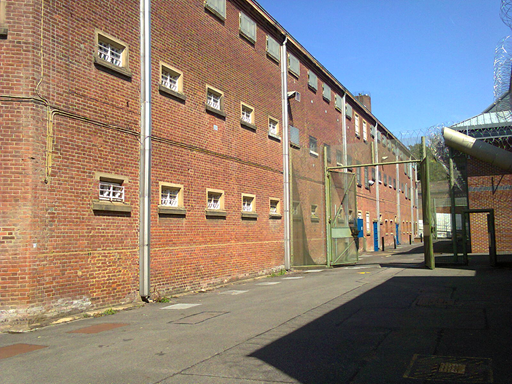 Whilst such developments are a long way off ­– five to ten years or so ­– the intended result will be a culturally important heritage centre, combining a focus on two of the great state institutions: the Church and the prison. This hiatus, however, presents opportunities for thorough research and consideration before the stories of Canterbury prison are presented to the public. Such time is invaluable because an ethical and multi-perspective interpretation, as called for by Alyson Brown, will not be easy to produce. Part II of this blog goes on to consider some preliminary research on the prison and the challenges involved in using this to generate such interpretations.