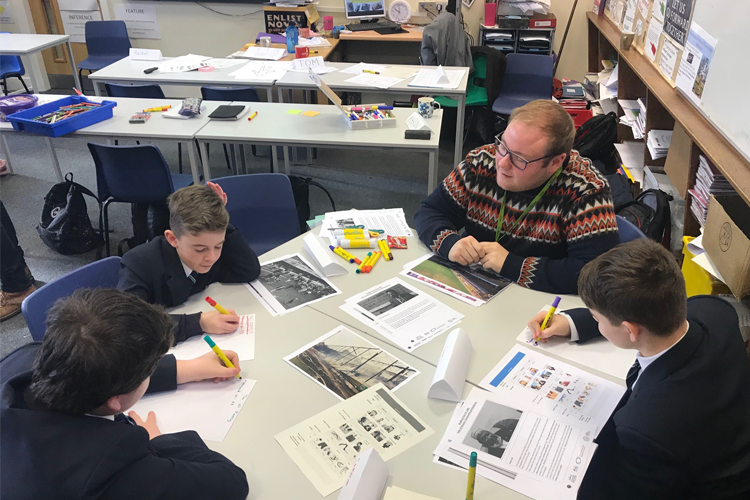 Forged by Fire is the research project which brought Aaron to work for the School of Cultural Studies and Humanities at Leeds Beckett University. Working alongside Shane Ewen, Leeds Beckett Reader in Urban History, and in conjunction with the University of Birmingham, the project researches burns incidents over the 19th and 20th century, and considers how individuals, communities, and in some cases, entire cities have been shaped by fire tragedies.

A regional example used in the research is the Bradford stadium fire in 1985, after which letters sent to the Bradford Mayor evidence how the entire city was affected by the tragedy, not only the 56 people who lost their lives.

Going beyond archival research work, Aaron and Shane have been delivering workshops to local school children in Bradford, raising awareness of one of the city’s biggest tragedies, and asking children to consider how the event has helped shape and change their community’s identity.

As part of the workshop, a talented makeup artist gives the children a realistic burn scar of their own, enabling them to question how a scar could impact their identity and sense of self, and allowing them to empathise with burns victims. At the same time as learning about history, the workshops are an innovative way to increase fire and health and safety awareness amongst the children and teachers.

The project also recognises how fire tragedies have highlighted political and racial issues throughout history, such as the New Cross Massacre house fire in London, in which 13 young lives were lost in 1981. Racial tensions at the time contributed to the youths being blamed for starting the fire through drunkenness, when in fact this was not the case. It took 20 years of activism for an inquest to clear their names and for them to be publicly recognised as the innocent victims that they were.

This type of historical event shows how one seemingly isolated fire can shape the collective identity of an entire community, help unite or divide a group of people, and can uncover the need for truth, most recently prevalent in the media through coverage of the Grenfell Tower tragedy.

Using digital mapping, Aaron specialises in studying the relationship and common factors that are presented through fire incidents, and how different types of injuries and incidents can reflect the social and political inequalities of that time.

Particularly, Aaron says, in cases of the early 19th century, where cheap synthetic clothing worn by poorer members of society, and basic housing amenities of poorer communities (such as using the same fire for heating and for cooking) led to an increase in the number of fire incidents. Aaron has been working with Leeds Beckett history students to share his knowledge, enabling students to use digital mapping to create their own public history projects.

Forged by Fire has a current exhibition on at St John’s Gate museum in London. The exhibition uncovers and investigates fire incidents in the home, at work, at play and at war, and shows how these historic events are still acting as a catalyst for wider change in today’s world, such as reform of the fire service and health and safety regulations in the workplace. The exhibition is free to attend and runs until the 1st February. For further information please visit the St Johns Gate Museum website.