Three English with Creative Writing students share their achievements over the last academic year and how studying the course at Leeds Beckett University has developed their skills and imagination. 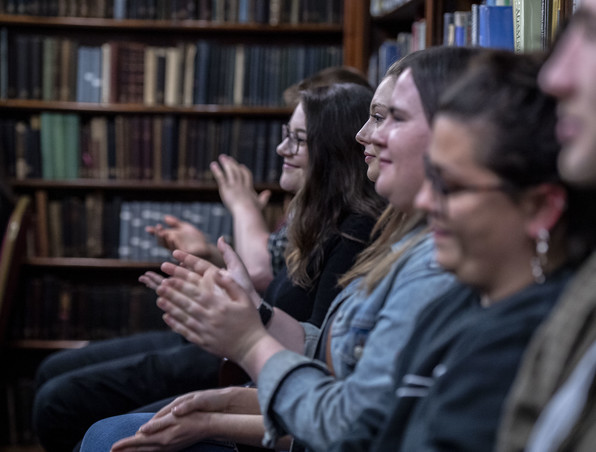 Amy Hobbs, Level 5 BAECW
Fresherella – winner of the SU award for Event of the Year 2020

When I first became President of the Drama Society, I never actually intended to write anything for it. I joined out of a love for acting, and a desire for a more exciting social life. However, after realising the expense of buying the rights to a pre-existing script, we decided that it would be best to write our own performances, at least until we could generate sufficient funds to buy rights.

So, in the summer between first and second year, I created Fresherella. Bringing the traditional Cinderella pantomime into the world of Leeds Beckett University, the titular character became a naive fresher, her companion 'Buttons' became an edgy Leeds boy, the Prince became a Rugby player and the evil stepsisters were transformed into evil flat mates.
But the script I wrote that summer ended up being a very minuscule part of the piece of theatre we created. Each of the incredibly talented student actors we cast brought something slightly different and admittedly better to their roles than I had originally envisioned. With each rehearsal, a new joke or quip was added by the cast which were far more hilarious than the ones I’d written. It was a hugely collaborative experience, fueled by collective creativity and teamwork, as well as the strong friendship we all developed.

The final product, the performance we gave just before Christmas as the semester ended, will always be one of my proudest moments. Hearing the audience cheering and laughing at lines I’d written was of course a source of personal pride, but I was even prouder of my actors; the vibrancy and energy they brought to the performance we had created together was beautiful.

In May 2019 I started doing poetry live in my hometown with a larger group: we worked with the Hull Socialist Party, the Warren and the BBC. At the BBC performance, there were two local publishers from Wild Pressed Books in the audience, so I seized the opportunity. I sent a draft of my book, Strawberry Fields¸ to them in October and the response was something like: “Hi, we saw you with working the BBC. You’re funny, but your written poetry needs work”. So, they began to edit and, in that time, the same publisher, held a competition to be in a poetry anthology. I submitted to that too, and had 3 poems in the anthology, named Dark Animals, which came out December 2019.

After this publication, I performed at a number of venues, and hustled with my art - and when Strawberry Fields came out in May 2020 I was invited to do interviews and podcasts in Manchester and for BBC Culture Night.

I think the most important part of the art to me is the ability to use it as a platform to raise awareness for sexual violence and trans rights.

Since starting my degree at Leeds Beckett my skills have multiplied, and I have elevated as a writer. One valuable skill that I will carry with me throughout my academic studies and my everyday life is that, as much as you are a solo writer, writing is very much a community activity, too.

The course has taught this by encouraging us to be editors for our peers work by posting creative pieces on a blog enabling writers to collaborate their ideas and to give critique and praise each other. I have learnt how valuable the editorial process is for me individually, and for the benefit of my classmates.
Semester two will always be something which I remember, it taught that truth is the best place to start, and that by writing about something real and adapting it with your creative mind, you can develop interesting pieces of writing.

Our workshops inspire hundreds of fresh ideas for students, with activities such as starting up micro-publishing projects, creative pieces based on factual articles, and work shopping one another's work online.

I think that my greatest success so far is finding focused interests and developing them into new ventures. The most important thing is the process – I regularly practice the tasks from seminars and I’ve found that many successful pieces can come from something as simple as a list of fun words, or a fragment of a memory. My first year has been truly enjoyable, and I’m looking forward to my future years at Leeds Beckett.