Final year Events Management Students Corrie Fisher and Daisy Carpenter were selected by an events management company to be a part of the events team at The Commonwealth Heads of Government Meetings 2018. 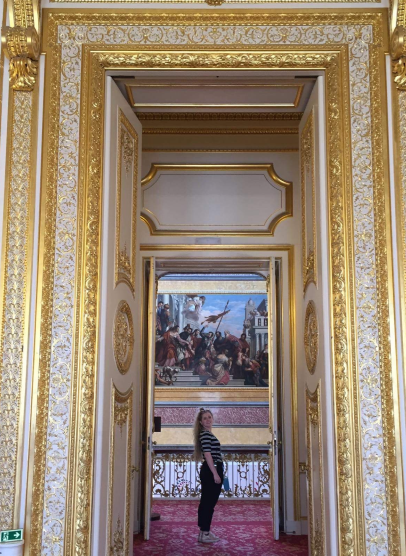 The Commonwealth Heads of Government Meetings 2018 (CHOGM) took place at numerous prestigious venues and addresses in central London. The final year students were employed as production runners which involved helping wherever they could and making themselves known to everyone on site as handy helpers!

They were involved right from the event set up and build through to the event close and they worked at some incredible and not to mention exclusive venues.  Corrie and Daisy’s roles included being involved in accreditation, radios, signage, event decorations and much more between the commonwealth village at Lancaster House, Marlborough House and St. James’ Palace located on Green park, to Buckingham Palace, The Queen Elizabeth II Conference Centre, The Delegates Hotel and other London Hotspots!

A particular highlight for Daisy: ‘The most amazing takeaway from the whole experience was to witness the enormously high security levels and measures taken to such a major event with so much need to protect important people, delegates and heads of government from all over the world, it truly was like nothing I have ever seen.

‘Another major highlight for me was when Corrie and I were enlisted to help in one of the press rooms to deter people from making the cameras shake. Little did we know this was the closing brief for the event where PM Theresa May, and the Secretary General of the Commonwealth Patricia Scotland was with the President of Ghana, The prime minister of Grenada and The Prime minister of Samoa were they were being questioned by the world’s media.

I also was fortunate enough to stay on to work at the transport and logistics site for the event which was truly something to behold from an events perspective. The structure was created solely for the event on Hyde park and was surrounded by walls and the entire thing was open aired and covered in trackway with about 150 brand new cars and armoured Mercedes & land rover 4x4’s along with police control rooms, weaponries and even a prayer room!’

Summing up her experience Daisy adds: ‘Overall my CHOGM experience was one I will never forget, but I have also learnt that events are certainly not for the faint hearted and it is such hard work, but the rewards are completely worth it, especially when you’re 10 feet from the PM and witness history being made!’

Everything that is going on at the School of Events, Tourism and Hospitality Management.