The UK economy is growing, but there is much unease about the imbalance in growth between the North and South, particularly in favour of the South. Concerns are also growing around the current model of economic growth which is fundamentally within the financial and service industry. Currently, there is insufficient attention and investment into manufacturing, new sectors and new industries. In the main, these concerns for the North are around future sustainability, future proofing and economic resilience.

Therefore, in order to reshape services to fit changing needs and demands long term investment is needed in infrastructure, higher and further education and the knowledge economy. This will require public services to have an entrepreneurial approach and to be much more responsive.

Combined Authorities and many Think Tanks are attracted to the idea of developing both the concepts of the Northern Powerhouse and the new West Midlands Engine; fundamentally supporting the idea of growth partnerships across cities and regions based on economies of scale and agglomeration. New mayoral models of City Region governance have also been advocated as a way forward for the United Kingdom, building on the achievements of Greater London over the last decade. Yet there is no substantive evidence beyond London's success that proves that a one size fits all model can be successful elsewhere. 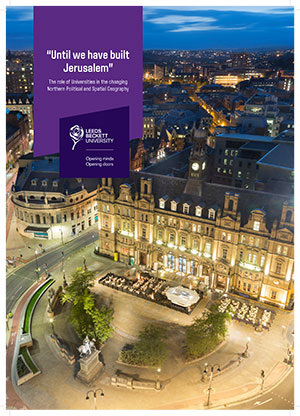 Universities have a key role to play in their local and regional economies and they are already major national and international players contributing in many policy arenas including:

In response to the developing and changing socio-economic geographies, Universities such as Leeds Beckett are debating and developing their contribution to these agendas and their approach to strengthen evidence-based research, policy support and development, and evaluation. Principally, Universities are advocating their role as key strategic Anchor Institutions. Universities also play a key role in international growth and in rebalancing strategies, and in the construction of new innovative partnerships across geographical and policy boundaries.

We invite you to consider the potential ways we can support and actively engage with the individuals, communities, businesses and local authorities that will be affected by the oncoming and changing tide of political, geographical and social change. We stand ready to help and play our part.

The booklet 'Until we have built Jerusalem' provides a cross sectional view on a number of areas that will be impacted by devolution and progression to a Northern Powerhouse. It is intended to provide our readers with a taster of the academic and applied knowledge and expertise available.

'The Further of public services under devolution in the Leeds City Region. 12 October 2015
'Scaling up the North towards a Northern Powerhouse' 15 January 2016.

If you are interested in the key topics in the devolution debate and in the role of Universities in regional, economic, social development and enterprise initiatives then please contact us