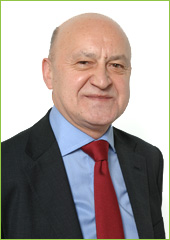 Professor Peter Marsh was Deputy Vice Chancellor of the University of Bolton until his retirement in December 2010. Prior to that he held several senior management posts at Bolton and had long experience as a lecturer and researcher at Manchester Metropolitan University.

Peter’s academic background is in Politics and Modern History, especially East- West economic and political relations, and he holds BA, MA (Econ) and PH.D degrees, as well as having been selected by the EU as  a Jean Monnet Fellow in European Integration Studies on two occasions. Another of his strong interests is in academic quality assurance, having been an auditor with the Higher Education Quality Council and the Quality Assurance Agency, as well as an adviser on degree awarding powers and university title applications, for many years.

Peter sat for several years as an external member on the University of Manchester’s Board for Awards and Academic Standards Committee and has extensive experience of University and College Board membership.

Peter has had extensive experience of developing higher education collaboration with international partners in Europe, the Middle East, Asia and Africa.