Do you appreciate architecture? Whether you’re into spooky historic buildings or shiny modern structures, Leeds has it all. What’s even more exciting is that many of Leeds’ most impressive buildings belong to Leeds Beckett, meaning that if you study here, you get to spend your time in them every single day.

First on our list, we simply have to talk about the beautiful architecture of our Headingley campus. Taking pride of place at the centre of Headingley Campus is the James Graham building. This stunning Grade II listed building presides over three acres of lush green parkland. It is home to our library, as well as other cool facilities such as acoustic labs and lecture theatres. The James Graham building has a rich history, for example, it was used as a military hospital during both world wars. During world war one alone, 57,000 sick and injured soldiers were admitted here to recuperate following injury in battle. If only the walls could talk, we’re sure they would tell some interesting stories…

This Grade II* listed building is currently home to Leeds Beckett’s team of IT superstars. The Grange was originally a monastic farm that belonged to Kirkstall Abbey, and it was first built in 1752. There were major alterations in about 1834 and 1858 by the Beckett family, who then sold it and the surrounding estate to Leeds Corporation to build a college. The Grange is beautiful to look at, but be careful… it’s rumoured to be haunted!

We talk about Kirkstall Abbey a lot, but it’s only because it really is very special. Built sometime around 1152, this ancient abbey was inhabited by monks for almost four centuries, until Henry the eight closed all of the monasteries down. There’s so much history here, and while wandering around you can really begin to imagine what the abbey was like almost 1000 years ago when it was first built. Entry is free, and it’s great to visit both in the day and night – it looks spooky after dark! There’s often events like movie screenings, food fairs and gigs here too. 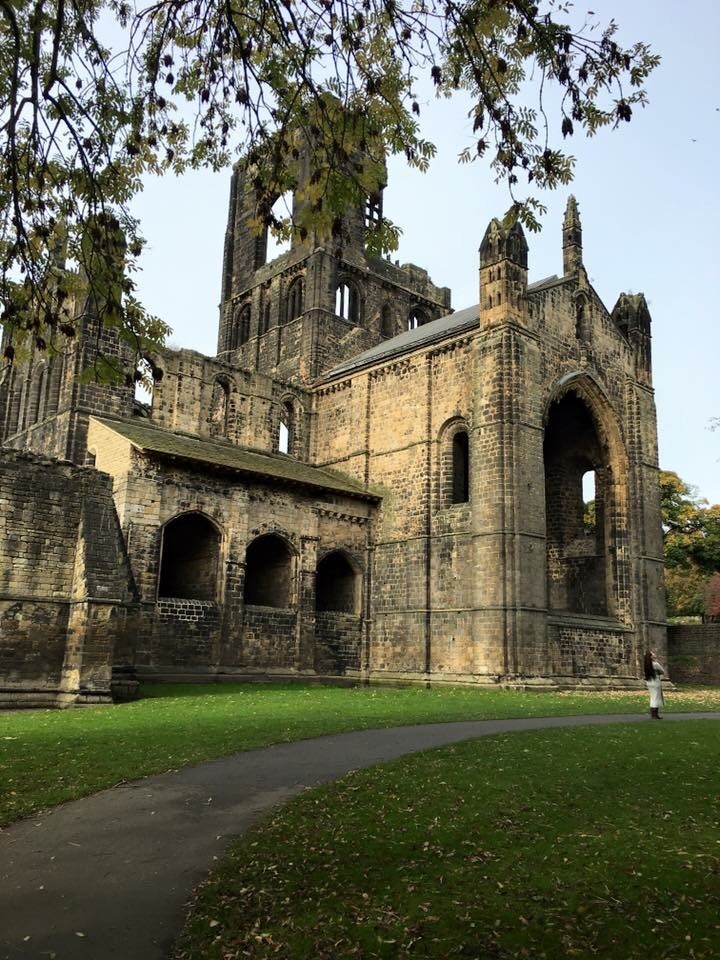 This place is genuinely spectacular, with lots of history to discover. It was built between 1759 and 1771 for wealthy plantation owner Edwin Lascelles. Since then, it’s not lost any of its splendour, with members of the royal family even living here in years gone by. The mansion is a grade I listed building, and the surrounding gardens span for over 100 acres, meaning there’s plenty to explore if you go to visit. 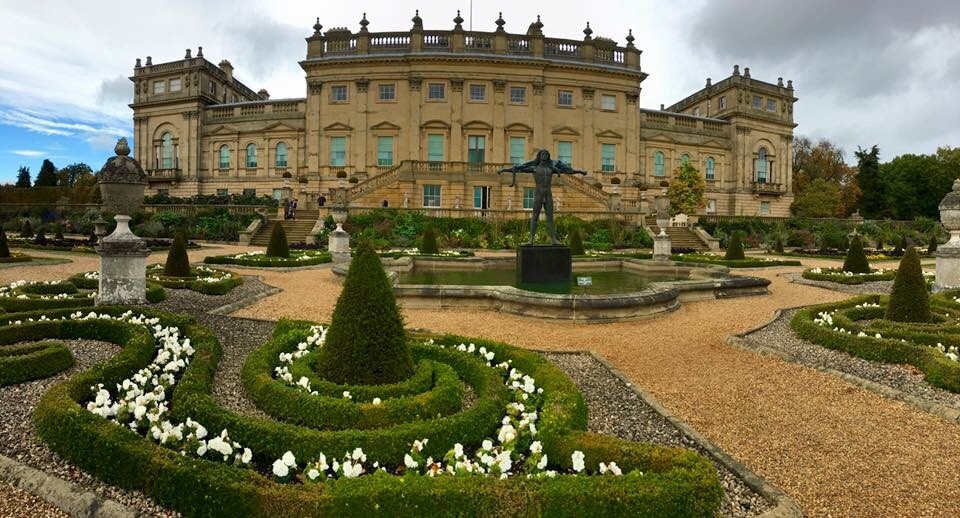 Leeds Town Hall was built between 1853 and 1858, and it’s located on The Headrow in Leeds city centre.  The Grade I listed building was opened by Queen Victoria, and built to be a public hall and law court. For 108 years it was the tallest building in Leeds, and it’s still noticeable on the skyline now. The building nowadays is host to a number of gigs, comedy shows and theatrical performances. It was also the location of this year’s graduation ceremonies, making for a very impressive setting.

Kirkgate Market is a favourite with our students due to its tasty food and low prices, but its architecture is something to be admired too. Built in 1857, it’s the largest covered market in Europe. It is the birthplace of Marks & Spencer, who opened a penny bazar in the market in 1884. In 1904, an ornate new hall was built to house the traders, and it’s still as beautiful today as it was then. The building has plenty of history to be discovered if you take a look – during the Second World War, bomb shelters were built for market traders, and the building was damaged during an air raid. We recommend exploring it with your camera late one afternoon, when the shoppers have started to disperse. 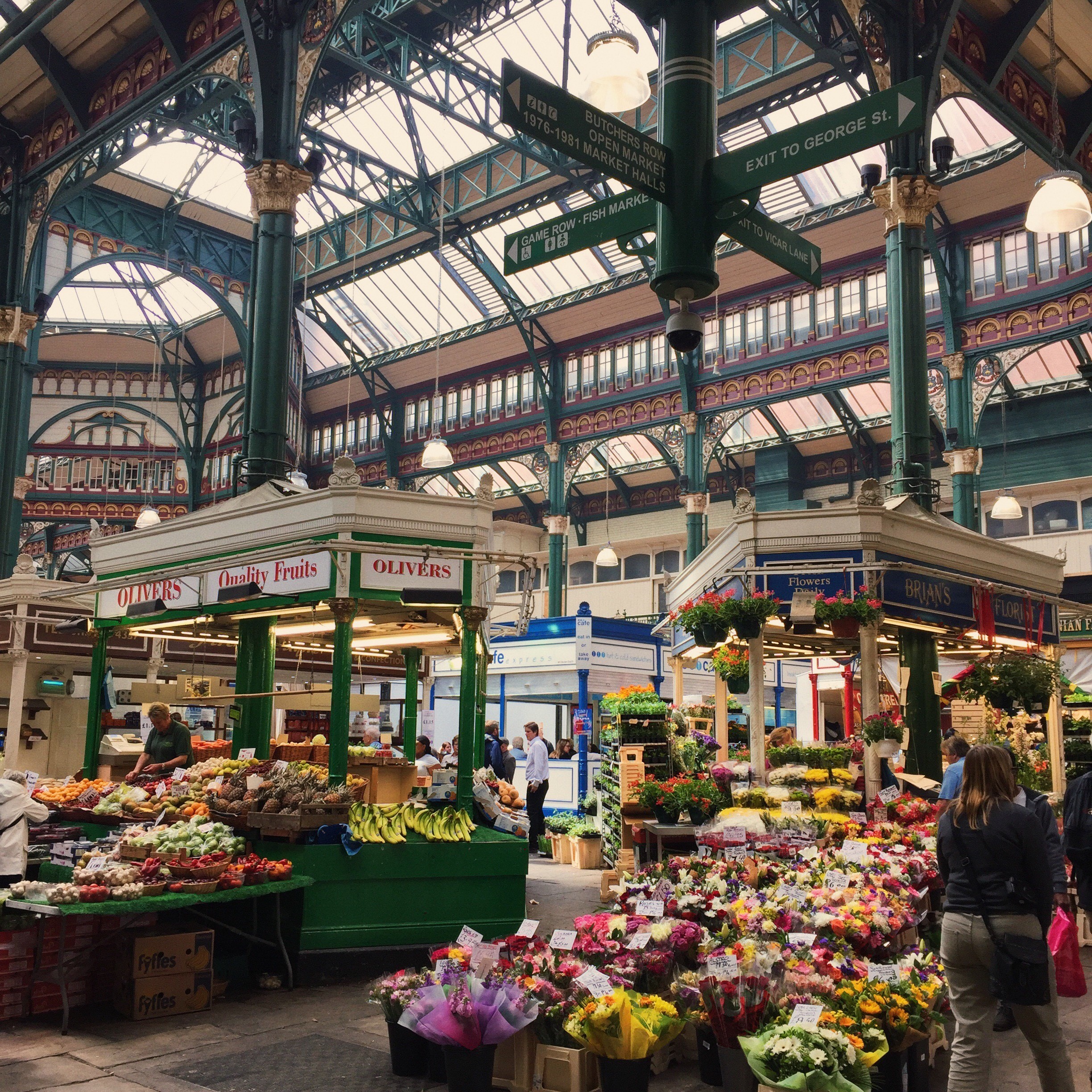 This beautiful Victorian building was built in 1862, and is currently home to a number of independent shops and food outlets. It’s a Grade I listed building, and it was originally built (as the name suggests) as a building where traders could exchange corn. It’s one of only 3 corn exchanges left in the UK. The design of the building was by Cuthbert Brodrick, the architect of the Town Hall. Cuthbert modelled the building on the Halle au Blé in Paris, but our building is more impressive in our opinion! It really is just as magnificent to view now as it was then, and well worth a visit – just don’t forget to look up! 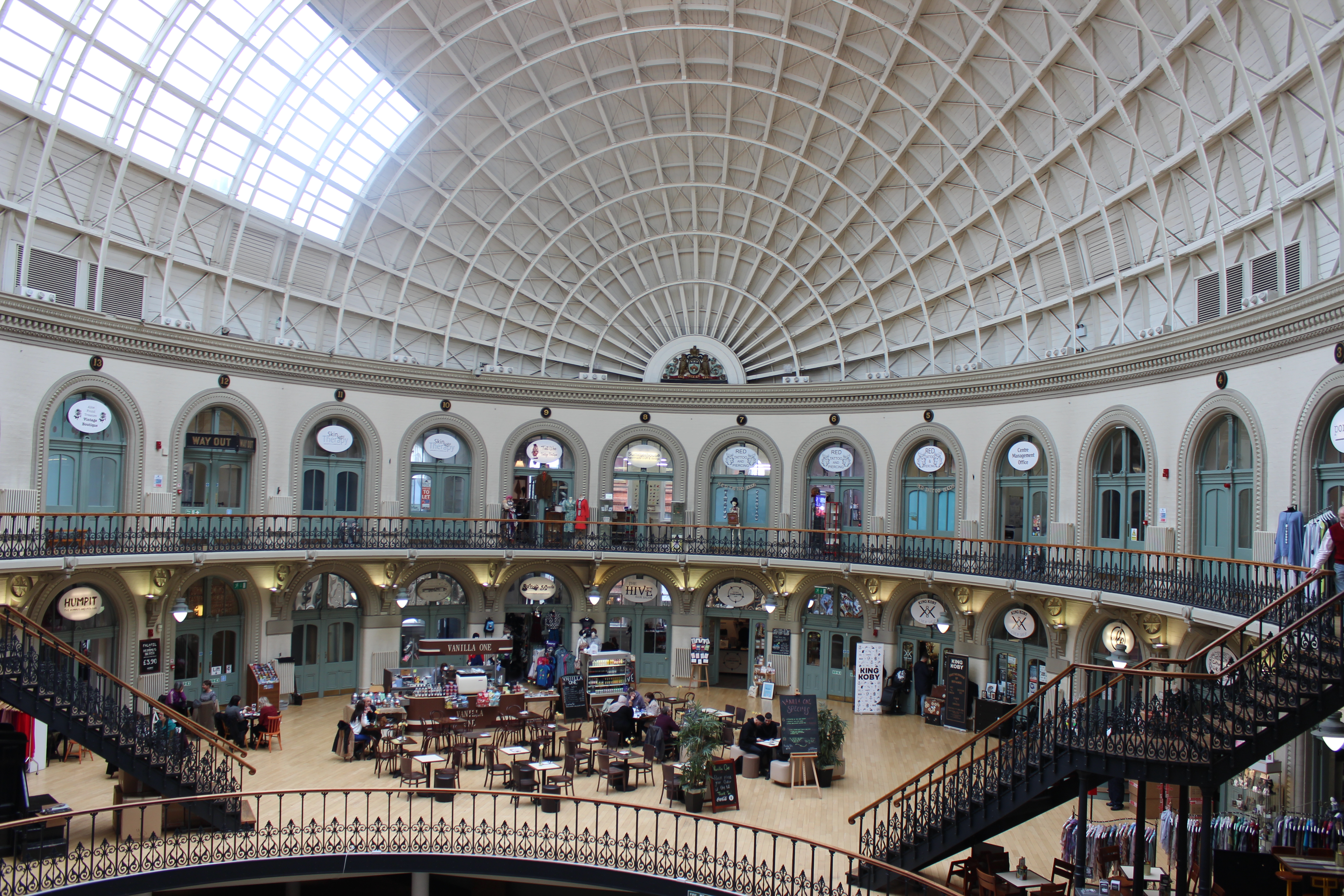 The Hyde Park Picture House is a grade II listed cinema which opened over 100 years ago in 1914. Located in Hyde Park, one of Leeds’ student areas, it stands out from miles away.  It still has many original features, and it’s the UK’s only remaining gas lit cinema. It opened just as the First World War was beginning, and at first it played only silent movies. Even the ornate gas lamp that’s outside the cinema is Grade II listed, which is pretty cool.

Officially opened in 1933 by King George V, Leeds Civic Hall is a truly stunning building made from pristine white Portland stone. It’s one of the most iconic buildings in Leeds, not only for being beautiful, but for what it stands for. It’s one of a number of buildings which was commissioned to meet the needs of Leeds as it developing from a poor town full to a blossoming city. One of the most impressive parts of the building is the two 6ft gold owls which guard the entrance facing Millennium Square. Owls feature on Leeds’ coat of arms, and you’ll see them dotted around in lots of places in the city centre. 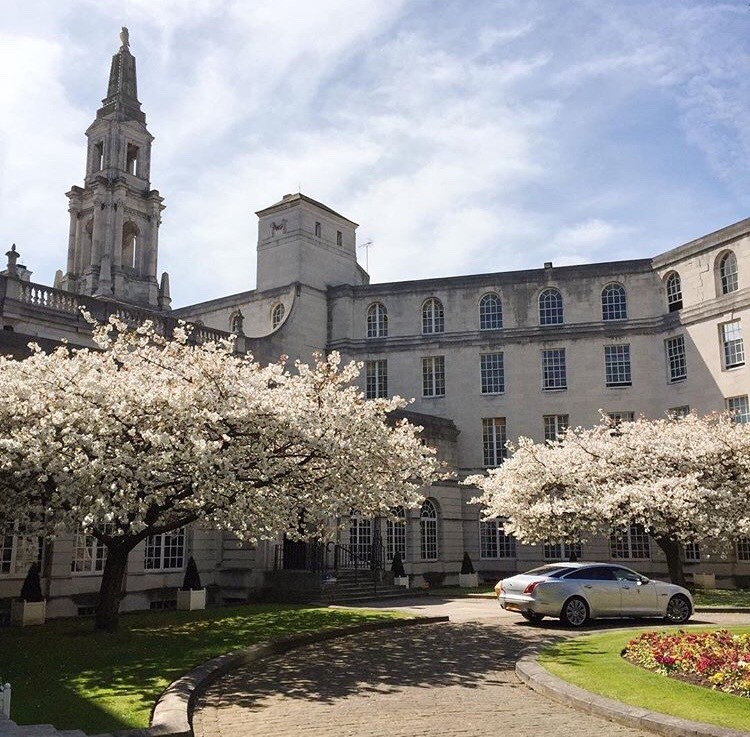 Leeds has several different shopping arcades which are steeped in history, and Thornton’s Arcade is the oldest. Built in 1878, it connects Leeds’ main shopping street, Briggate, with the street behind. The impressive arcade features neo-gothic architecture, and an adorable Potts’ clock which strikes every 15 minutes.

The Rose Bowl is Leeds Beckett’s state of the art teaching building, and it is home to our Business School. This impressive structure features a large glass atrium, with funky geometric panelling. The 'floating' glass pod houses several lecture theatres, which as a Leeds Beckett student, you’ll be able to enjoy. The Rose Bowl is located right next to the Civic Hall, and the contrast between old and new is really spectacular.

Broadcasting Place, winner of the Best Tall Building in the World Award 2010* is a fascinating building. It’s made of weathering steel, meaning it changes colour over time.  It’s bold and imposing, with it’s jenga-style rusty tower being visible from all across the city centre. Students interested in courses within our School of Art, Architecture and Design will spend plenty of time in here, in one of the many studios.

This one hasn’t been completed yet, but construction is well underway on our new creative arts building, which will be home to our School of Film, Music & Performing Arts. Set to be visually impressive and imposing over the city’s skyline, the building will include many amazing new facilities for our students. These include: a 220 seat Dolby Atmos cinema, a TV studio, dedicated studios for fashion performing arts and music performance, as well as much more. We can’t wait for it to be completed!

The First Direct Arena is one of the most interesting modern buildings you will find in Leeds, built with a honeycomb style exterior that lights up with multi-coloured light. Built during the recession, its aim was to re-generate the city by being a hub of activity and a new focal point in what was previously a quiet area of the city centre. The arena is built to hold 13,500 people and it’s illuminated in neon lights at night, so it’s difficult to miss when you’re wandering around the top end of the city centre.

Trinity is Leeds’ city centre shopping centre, which was completed in 2013. It contains over 120 outlets, and its design is truly stunning. Housed underneath a huge glass dome which reaches 100 feet above street level, the complex connects what was previously 3 different run-down shopping streets in Leeds. Just stepping inside Trinity feels as if you’ve transported into the future, and we challenge you not to be impressed by the various sculptures dotted around the place! 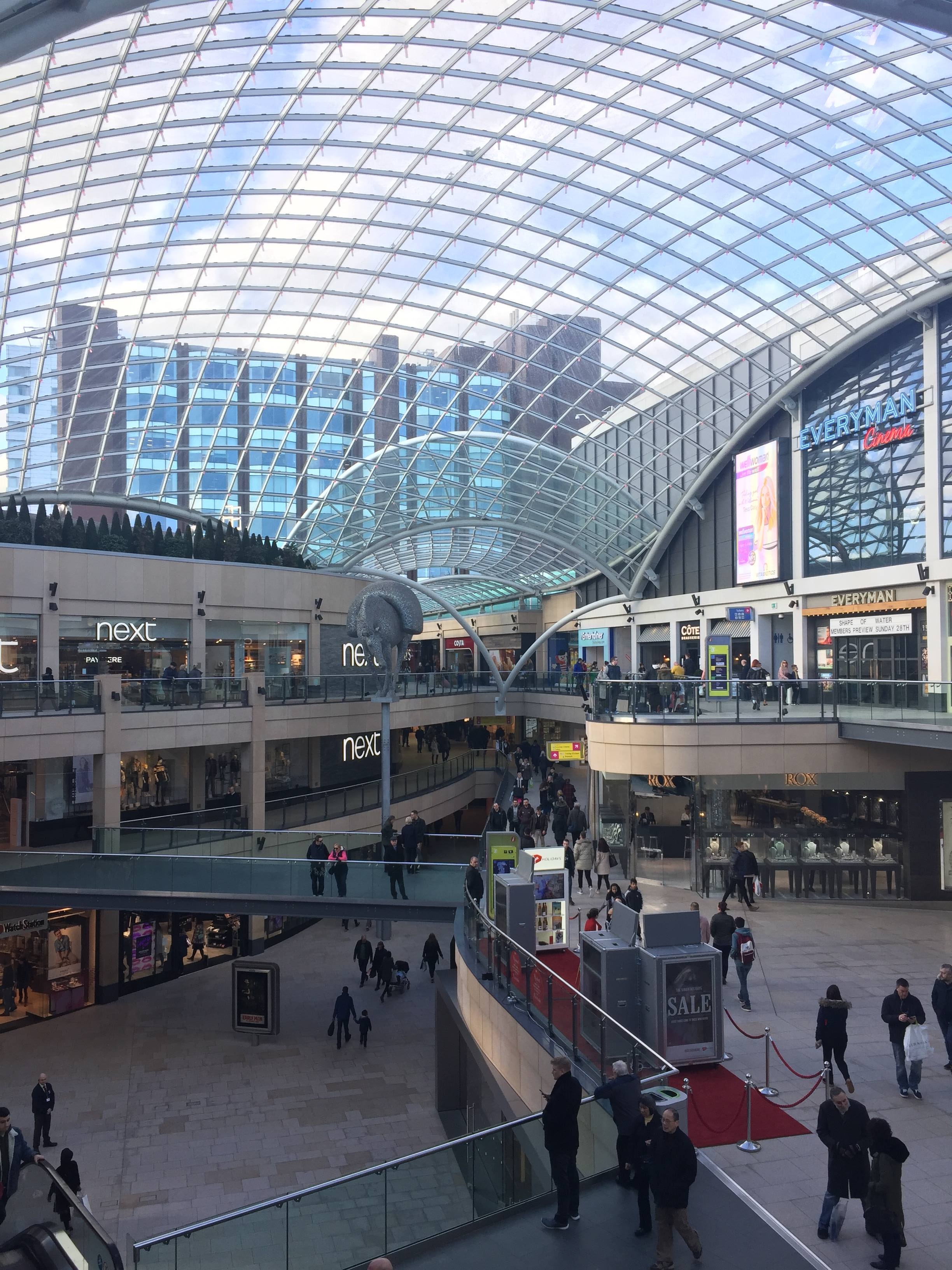 Victoria Gate shopping centre, one of Leeds’ newest additions, is a fascinating building inspired by Leeds' Victorian heritage and its historic shopping arcades. From the outside, the latticed concrete design is noticeable from miles around. Inside, there’s zigzag patterned stonework, shiny glass and plenty of beautiful natural light. It was built to house John Lewis, and it also has a casino and a number of fancy restaurants.