Sir Bob Murray CBE has been installed as our University's new Chancellor during an official ceremony in the Great Hall at Headingley Campus.

The formal occasion began with 100 representatives from across the university leading a procession, followed by a showcase of student work, including music and dance performances.

Sir Bob Murray said: "I am both astonished and thrilled to be here today. I feel very privileged to be invited to be Chancellor of this esteemed institution and I would like to thank the University for granting me this unique position. This truly is a first class regional university with great vision, drive and values. Even in 2008 when I was awarded an Honorary Doctorate here I never dreamt of today. When I was invited to be Chancellor I had to be sure I could support the universities aspirations and vision of delivering student success and promoting innovation and enterprise. Principles and ideals I share and feel strongly about. Once I was certain of this, I didn't hesitate in accepting.

"I hope my experience in business and lifelong focus on education will give me the necessary qualities to support the university, its outstanding staff and the next generation of leaders, entrepreneurs and professionals to achieve their ambitions and aspirations. I now look forward with great anticipation and excitement to my role as an ambassador and advocate."

What is a Chancellor?
A Chancellor is an ambassador for a university, raising its profile and advancing its interests amongst stakeholders and the wider community; articulating its vision, values, and strategic aims; and promoting its achievements and impact on society and the economy. The Chancellor is also the ceremonial figurehead of a university. As such, their most visible role is to preside at graduation ceremonies, conferring degrees and honorary degrees whilst recognising and celebrating students' success. Another important role that any Chancellor plays is providing access to networking and fundraising; and promoting innovation and enterprise.

Vice Chancellor, Professor Susan Price, added: "I am absolutely delighted that Sir Bob is joining us as our Chancellor here today. Welcome to Sir Bob: we are all very much looking forward to working with you over what I am sure will be a long and happy future."

Professor Price welcomed guests to the ceremony while Jenny Share, Secretary and Registrar, gave a citation detailing Sir Bob's achievements to date. Following his installation, the Lord Mayor of Leeds offered Sir Bob a civic welcome, before he was welcomed on behalf of university staff by Professor Kevin Hylton and on behalf of students by President of Leeds Met's Students' Union, David Alcorn.

Lord Mayor, Councillor Ann Castle, said: "I am delighted to be here at Leeds Metropolitan for this installation ceremony, particularly as I am proud to be a graduate of the University. Leeds Metropolitan University is not only significant to me personally, but is incredibly important to the current success and the future prosperity of our city and region. On behalf of the City of Leeds, I am pleased to welcome Sir Bob Murray as Chancellor. I am sure he will enjoy representing Leeds Metropolitan University. my University. and articulating the important role it plays in the life and prosperity of Leeds and Yorkshire. I wish him the very best of success in his new role."

The university announced Sir Bob was to be their new figurehead in October last year.

Sir Bob is a renowned businessman, philanthropist, and enthusiastic supporter of education. As an alumnus of Leeds Met, Sir Bob's links with the university go back to 1969 when he moved to Yorkshire to study accountancy part-time at the university's predecessor institution, Leeds Polytechnic. Some years later, in 2008, he was awarded an honorary doctorate in business administration by Leeds Metropolitan for his contribution to business and sport. 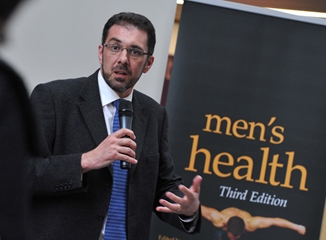 Report reveals the state of men’s health in Leeds

A report which puts the spotlight on the health of men in Leeds is being published today by health experts at Leeds Beckett University. Colleagues from Leeds Beckett came together on 26 July, to take part in local charity, Friends of Dorothy’s, Silver Pride celebrations. The final destination of our virtual world tour brings us back to Britain. Explore top attractions including Buckingham Palace, Stonehenge and Edinburgh Zoo.