Cape Wrath is a sixty-minute solo, autobiographical storytelling show, written and performed by Alex Kelly. It is presented in a minibus for an audience of fourteen to twenty (depending on minibus design). It premiered at Northern Stage at St Stephens at the Edinburgh Festival Fringe in 2013, and then toured in the UK (and Germany) throughout 2014 and continues to tour now.

The project builds on previous shows which explore how autobiographical performance can tell other peoples’ stories responsibly and ethically. It interweaves three storytelling strands. The first tells the story of my grandfather, Henry Radcliffe’s journey from Walsall in the West Midlands to Cape Wrath, the most north-westerly point of mainland Britain, in September 1988. The form of this is a series of texts based on the diary-letters that he sent back to my Nanny. His original letters are incredibly detailed, rambling and non-chronological; the show texts are presented as letters – taken out of envelopes and read – but are written in the third person, and detail only his actions, in chronological order.

The second strand tells the story of my own recreation of that journey, travelling from my family home in Sheffield, up to Durness and on to Cape Wrath by public transport in September 2011. This story is told conversationally, and in these sections of the show I respond to any questions or interjections from the audience as they happen.

A third strand emerges from the second, exploring the territory between storytelling and contemporary performance with a series of illustrations or disruptions to the storytelling: a map reading session with too many Ordnance Survey maps opened up in the minibus

During the original travelling research, I live-Tweeted the journey, telling some of my grandad’s story in parallel with my own, and answering questions from my followers. These tweets and Instagram images were then assembled as a Storify story.

The Cape Wrath project was initially disseminated online, through the platforms Twitter and Storify. Whilst it is not possible to pinpoint the exact number of Twitter users who engaged with it (a Tweetreach survey at the time estimated at least 8,000 users) but over 1,800 people have read it on Storify.

The theatre version has been ‘on tour’ in its early lecture version and minibus version since 2012, including a two-week run at the Edinburgh Fringe. This was a two-shows-a- day run which sold out, and extra shows were added in the final week. The minibus version has now been performed 130 times, throughout England and Scotland, at large theatres such as The Crucible, West Yorkshire Playhouse and Plymouth Theatre Royal, to small venues on the rural touring circuit. The show is still in demand, and more performances are scheduled for April 2018. The performances attract a contemporary theatre audience, as we might expect, but also an audience of people who are walkers/hikers who have been to Cape Wrath themselves, and who attend purely for that reason, knowing nothing else about the company or the show.

The show has been widely and positively reviewed (see below), and has been cited in conference papers, at least two PhDs (other than my own), and a number of articles and a book on Performative Experience Design (computing). The development of the research was a significant part of my PhD by Existing Published Work, successfully defended in November 2017.

“The most intriguing part of the evening was the least formed: Alexander Kelly retracing the 1988 journey of his grandfather from the Midlands to Cape Wrath, the most north- westerly point of the British mainland. There can be something thrilling about seeing work that is still full of possibilities, about which nothing has been decided, not least if it will ever become a show. The truth is that, like Kelly, you have to take a chance. Dip in and you may strike gold.”

“As it is, the piece still stands as a lovely series of moments meditating on remembrance and place, family and, well, Volk. But without being right-wing as those elements might suggest. There is something quite reassuring about the matter-of-fact way that small migrations – his grandfather from Scotland to the Midlands, the journeys made by various other travellers Kelly encounters, the fact that the woman he happens to sit next to on the coach is an English as Foreign Language Teacher. Subtly, the piece does present People not as anchored to Place, but as roaming free-agents who happen to end up in various spots, as exemplified by the couple who run the coffee shop at the end of Britain who now live in total isolation since the other families who lived there have all gradually moved away.”

“Look, the piece seems to say, it’s not so hard after all. Just notice one another… Through this intimate story about family and travelling, Third Angel manage to delicately pack in plenty of other, bigger ideas: the psychological dimension of travelling, what ancestry, nation and place mean to us, the mythical fascination of isolated locations, how we relate to those around us. It’s simple, yes, but not simplistic… We can just enjoy this enchanting ride.”

“There is something more than charm, though, in the sharp narrative arc of Kelly’s story, as he tries to retrace his grandfather’s steps to Durness and beyond. There is a recognition of the complexity of Britain, and its huge range of lives and landscapes and connections, that adds something heartfelt and significant to the current debate about the future of the union; and a sense, too, of the importance of love – binding people to the places they came from, helping them build new lives elsewhere – in easing the passage from past to future, and from the place where we once lived, to where we are now.” “HOT SHOW”

“Is this story-telling or drama? Both. I don't think labels matter in this must-see show. Book quickly. This is one of the Fringe secrets that is fast getting out by word of mouth.”

“The most wonderful story... a joy to be part of... a master story teller. When we got off the minibus a fellow traveller said 'it feels like we should be somewhere else now', and I couldn't really have put it any better myself, feeling as if I'd travelled hundreds of miles without moving anywhere at all.”

References to the research: 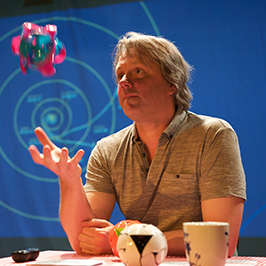