The Caribbean Carnival Cultures research platform, supported by the Centre for Culture and the Arts at Leeds Beckett, is kick-starting carnival research in the UK and across the Caribbean diaspora. Leeds is a city perfectly placed to be leading on carnival research as it is home to the longest-running Caribbean carnival in Europe. We believe that carnival needs to be taken seriously and we aim to bridge the perceived gap between academic research and artistic practice in carnival by encouraging a necessary dialogue between the two.
Arts Council Grants for the Arts
A successful CCC Arts Council ‘Grants for the Arts’ funding bid by Emily (April 2017) supported the conference and the creation of Max Farrar's exhibition of 50 years of LWIC carnival which has now been shared between the student social space in Broadcasting Place, Leeds Beckett University and Leeds West Indian carnival events, Leeds Library and the University of Leeds.
Carnival Cultures Conference

The three-day Carnival Cultures conference in May 2017 attracted 160 national and international participants, featured over 45 speakers in four parallel panels as well as dance, design, poetry and traditional masquerade workshops and a Civic Reception in Leeds Civic Hall. The event received an overwhelming amount of positive feedback and participants travelled from across Europe, the Caribbean, Canada and the US to attend. The activity also allowed carnival artists locally, nationally and internationally to showcase and share their work, including performers and playwrights Tony Hall and Enitou Springer from Trinidad and LWIC founder Calvin Beech from Canada. The conference also had a lasting media legacy; it was filmed and photographed extensively and received media attention including an article in North Leeds Life, two articles in the Yorkshire Evening Post and a BBC Leeds radio interview with Emily and Leeds West Indian Carnival founder Arthur France MBE. The conference was also filmed by four different film crews including ‘Made in Leeds,’ ‘Look North’ and a filming team creating a BBC documentary on Leeds West Indian carnival. A group of Leeds Beckett University students studying filmmaking at Masters level were also in attendance and the themes of the conference have framed their documentary film on LWIC. The LBU carnival film, ‘All of We Matter’ will be launched in November 2018.

The website has become a lasting platform for carnival artists and researchers to find out more about the field and showcase their work. The platform and conference has already had an impact on the carnival sector; Pepe Francis, Director of Notting Hill Carnival Enterprise Trust, wrote on his CCC conference evaluation form; “This has inspired me to have a similar conference in Notting Hill. I loved every minute of it”.

Other Caribbean Carnival Cultures (CCC) events have included a carnival film screening at the Little Reliance Cinema, a night of Caribbean food and music at the Leeds West Indian Centre and a Black Heritage Walk led by Historian Joe Williams around the Leeds University campus. Arthur France MBE, founder of Leeds West Indian Carnival who recently received an honorary doctorate from Leeds Beckett university, described the activity as ‘exceptional’ and ‘outstanding’.

Another key way in which the activity has helped Caribbean Carnival Cultures to develop has been through challenging the perceived barriers between artistic and academic approaches to carnival. Facilitating a discussion on these perceived boundaries is at the heart of the Caribbean Carnival cultures research platform.

The CCC activity has also had an impact on local community events. The Chapeltown Literature Festival focused their annual literary event (Sept 2017) 'Word Junction' and worked in partnership with the CCC. This ‘mini’ carnival conference event provided an opportunity for people in the local Chapeltown community to engage with the key themes of the CCC and listen to readings, academic papers and artists for free in a community environment. It was extremely well attended and engaged members of the public who may not have been able to afford the conference fee or engaged with the university environment. 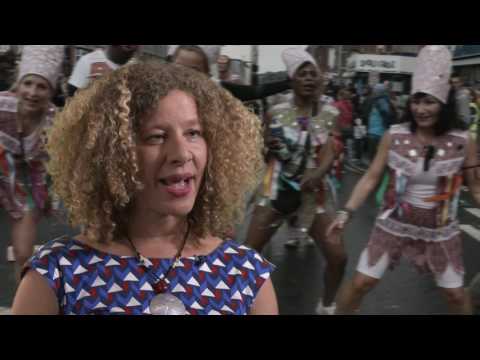 All of our key contributors (listed on the Caribbean Carnival Cultures website) regularly publish on carnival. We have a fully-funded PhD student in carnival cultures and aim to provide further opportunities to enhance research in the field. We also reach beyond the academic institution and support the local and national carnival community. Community is at the heart of carnival and we are dedicated to creating and nurturing community links to enhance the perception and understanding of carnival globally.

Through a Caribbean Carnival Cultures (CCC) programme of events the School of Cultural Studies has forged strong, lasting and meaningful connections between Leeds Beckett’s Centre for Culture and the Arts and other arts, cultural and academic organizations, which has helped our organisation to develop its reach and its impact. CCC activity has entailed collaboration with carnival artists, performers, academics, designers and musicians locally, nationally and internationally. We have worked with Leeds West Indian Carnival, Leeds City Council, Leeds University-based academic journal Moving Worlds, Cabasa Carnival Arts, The Geraldine Connor Foundation, Leeds based publishers of Black and Asian Literature Peepal Tree Press, Leeds Young Authors, Chapeltown based RJC Dance and local Black and Asian artists, poets and writers. It also helped our organisation develop by opening up carnival-related artistic and academic activity to young people studying at the university. Final year English Literature undergraduate and postgraduate degree and PhD students worked hard to facilitate the 2017 conference and presented the very best aspects of the university to the public. CCC research also underpins modules at Undergraduate, Masters and PhD level designed and taught by Emily Zobel Marshall.

The Caribbean Carnival Cultures research platform, supported by the Centre for Culture and the Arts at Leeds Beckett, is kick-starting carnival research in the UK and across the Caribbean diaspora. We believe that carnival needs to be taken seriously and aim to bridge the perceived gap between academic research and artistic practice in carnival by encouraging a necessary dialogue between the two.