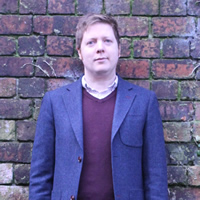 Ben is an animator, illustrator and interactive designer with over 15 years industry experience. He has taught undergraduate students at Leeds Beckett University since 2008.

Ben has worked as an animator on a number of broadcast animation productions including the BAFTA award-winning series Charlie And Lola and Little Howard’s Big Question for the BBC. He has also worked on a number of interactive projects for children including online games for Children’s ITV and an eSafety platform for primary schools.

Ben runs Inkco a studio where he directs and creates animated and interactive content for broadcast clients.

Ben is currently studying for an MPhil which explores authorship, ownership and storytelling via diverse methods of chance: digital random, analogue tombola-pick or the influence of a wayward toddler. He is interested in creating  opportunities for new narratives using uncertainty, surprise and the unknown acting as instigator, collaborator and subject. This work spans animation, coding, creative writing, performance, assemblage and documentary.

Project Something is a collaboration between Benjamin Hall and Jonathan Briggs which explores data, chance and storytelling within a post-digital landscape. This ongoing enquiry of practice and research aims to present the narrative and narrative-less-ness of this data as new compositions and opportunities. Outputs include Instagramophone and Another Engine which have featured at Sheffield Design Week and Leeds Digital Festival.