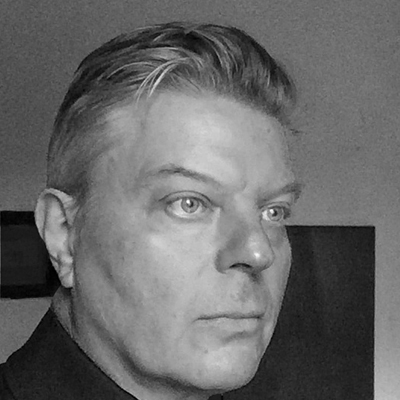 Since graduating from the Royal College of Art in 1987 Chris has exhibited work nationally and internationally. Most recently he has been collaborating with artist Nathaniel Mellors on several projects and curated exhibitions, Including in 2011 :Hypercolon: at SMART Project Space in Amsterdam and The Nest at cobra Museum, Amstelveen and in 2012 at Monitor in Rome.

The work spans across a range of disciplines and often focuses the relationship between painting, sculpture, film and video. Various processes of photography, particularly chemical and analogue are adopted as both documentation and invention.

He is a founder and co-director of &model gallery in Leeds, which since 2013 has curated and exhibited emerging artists from the local region and more established artist from the UK, Berlin and the United States.

As well as teaching at both undergraduate and postgraduate level Chris has supervised several PhD students to completion.

Of particular interest are playfulness, humour and satire in the language of art. Current research focuses on the currency of writings on the Palaeolithic and Neolithic periods and reflections around prehistory from our confused contemporary condition. Much of this current research is evidenced in work currently being made jointly with Nathaniel Mellors.

Research has also been exercised through collaborative curating. In :HYPERCOLON: in Amsterdam 2011, the eight rooms of the exhibition were used to create a narrative framework in which each space was mapped to a specific body part reflecting on how they are adopted in works of art to represent themes and ideas, particularly in works of social satirical commentary.

The exhibition included a variety of work dating from 17th century to the present. Among many others it included the work of Vito Acconci, Paul Laffoley, Gladys Nilsson, Basil Wolverton, Robert Abel, Brian Catling, Tala Madani, Erkka Nissinen, James Gilray, and James Ensor. The exhibition was supported by the Netherlands Film Fund, The Netherlands Fund for Performing Arts, Amsterdam Fund for the Arts, Mondriaan Foundation, Municipality of Amsterdam.