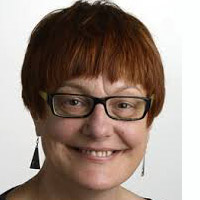 Anna is an award-winning filmmaker and writer and has had works screened at film festivals throughout the world, on television, in museums and at live events. Anna started out working independently as a freelance editor on documentary programmes for Channel Four. In 1988 she moved from London to Leeds to join a media facilities and production company known as Hall Place Studios. While there Anna developed skills as a producer and made a wide range of videos and 16mm films for cinema and broadcast as well as running training courses in film.

With Bekki Wray Rogers she set up a production company known as Frigid Films in 1999 that made short films. At the same time Anna took up writing and has since made a number of shorts and theatre productions from her scripts. Her current interests centre round writing for transmedia and multi-platform production. She has collaborated with Bellyfeel Productions in Manchester to write and produce Bolton Storyworld – a transmedia prototype made with students at the University of Bolton that won the Learning on Screen award 2016.

Anna worked the University of Bolton before joining Leeds Beckett in 2014. Her academic interests include screenwriting, transmedia narratives, Northern Irish cinema and film-making practice. Her interest in transmedia production is an extension of her long history of engagement in arts and media activism in support of a ‘democratic media’. As well as making transmedia productions Anna has been studying the practices and processes of large and small transmedia companies and the effects these have on their storytelling practices.

Anna recently gained her PhD from Leeds Beckett University in the area of transmedia production and the form’s ability to explore narratives relating to the complexities of the Northern Irish experience.

Anna is Head of Screenwriting at the Northern Film School and teaches modules on the BA and MA that are related to screenwriting. She also offers guest lectures on writing for new media technologies at Birkbeck and other universities

Anna's current research presents new interactive, transmedia writing models and prototype/designs for film, TV, the web and mobile phones. She completed her PhD Red Branch Heroes in October 2018 and its two main aims were to explore the changing role of the writer in creative media projects and examine the possibilities that transmedia production might open up in the context of post -1998 conflict in Northern Ireland.

Her research demonstrates the need for writer as designer, collaborator and orchestrator in new media narratives. Transmedia and Immersive technologies provides opportunities to develop a storytelling method that has the ability to create and imagine new communities and future narratives. It opens up possibilities for inventiveness, involvement and participation.

Anna’s most recent project is Secret Story Network which promotes participant storytelling through online role playing.  The project has been developed in association with the media company Bellyfeel and Anna has received funding from the Arts Council of England and XR Stories to develop and extend this new form.  The project will not only tell new collaborative stories but will offer storytellers the opportunity to engage with their favourite film and TV programmes.

2019 (ongoing)  - Cut and Dried – multi-platform documentary mixing past and present, fact and fiction around Rochdale Canal