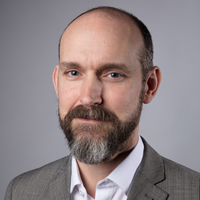 Ian Truelove is an educator, artist, designer and technologist whose work explores the nature of material reality through creative practice. His research, which is predominately painting-led, is informed by philosophy, quantum theory and art history.

Ian is currently investigating the potential for using virtual reality technologies in a creative context, building on research undertaken as part of the JISC funded project, Open Habitat. Through this project, in collaboration with colleagues at the University of Oxford and King’s College London, Truelove investigated how ‘maker’ approaches in multi-user virtual environments might enhance arts-based teaching and research. He is now developing strands of this research through his PhD, with a particular focus on the specificity of the pixel as a painting medium.

He is the School of Art, Architecture and Design’s representative on the University’s Research and Enterprise Technology Advisory Group, and advises this group on the latest VR development, informed by his own art-practice and his participation in events such as the VR Show at the Business Design Centre in London, April 2017. He delivered a VR workshop at the Deleuze Studies International Conference Camp in Rome, July 2016, and is showcasing a new VR-based artwork at the Exploring Digital Futures conference in Scarborough, May 2017.

Recent outputs include the collaborative artwork, ‘Seven American Deaths and Disasters’ with Kenneth Goldsmith and Professor Simon Morris in Reading as Art (Exhibition) at Bury Art Gallery (2016), the publication of the journal article, ‘Z is for zero: the world is flat’ (2017) in Design and Creativity, and the screening of the video artwork, ‘The thing in itself’ (2016), on the Big Screen in Millennium Square, Leeds.