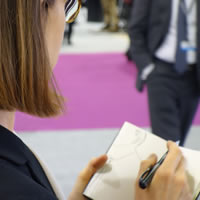 Jill Gibbon is a politically engaged artist with research interests in war, art, and aesthetics. She is currently working on a project documenting the secretive world of the international arms trade by drawing undercover in arms fairs. She gets inside these events by masquerading as a client, and then draws the weapons, and rituals of marketing, hospitality, and dress. In this respect, she is interested in bringing art and performance out of galleries into contested political spaces. This builds on her PhD (2008) that explored the radical potential of reportage drawing.

Jill teaches on the BA in Graphic Arts, and supervises PhDs in art practice and theory. She welcomes PhD proposals, particularly in relation to drawing, performance, reportage and politics.

Jill’s research is interdisciplinary relating to art, and the arms trade. She has contributed to the ‘aesthetic turn’ (Bleiker, 2001) in War Studies by drawing the etiquette of the arms trade, showing how weapon sales are legitimised through rituals of business. Her performance as an arms trader provides a metaphor for the masquerade of respectability in the industry, and challenges the implicit positivism of much reportage. She contextualizes this approach by retrieving examples where reportage has been used as a political act, for instance in Dada.

Her work has been exhibited in the UK, US, and is in the permanent collection of the Imperial War Museum, and Bradford Peace Museum. She regularly gives talks about her work, and has been interviewed by the Guardian, BBC World Service, Al Jazeera, and Campaign Against the Arms Trade.

"Working undercover, artist Jill Gibbon sketches images of the surreal behind-the-scenes world of military fairs and expos to highlight how the arms trade treats missiles, tanks and bombs like any other commodity" (Vijaykumar, The Guardian, 2014)