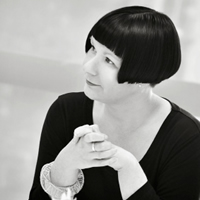 Jo Hamill is the Course Director for BA (Hons) Graphic Design within the Leeds School of Arts.

Before entering the teaching profession, Jo worked as a graphic designer and freelance illustrator. Her current practice as a Graphic Artist explores the multifarious occurrences innate within language and in particular the written word. Robert Smithson’s assertion that ‘a word outside of the mind is a set of dead letters’ supposes a lone written word as inactive matter but its incredulity is how one written word can activate another. The absurdity of language perhaps lies in its limitations or failings, or more accurately our failings. The containment of the written word, its tying down to the page, its order, its structure and the conventions it adheres to, affords us the opportunity to grasp what is being said and consequently what is being unsaid. It is through the conventions we encounter that we are able to search for meaning, a meaning so often fragile, easily misunderstood or lost in the interstice between the concrete and the conceptual, the signified and the signifier. When words fail or cannot be found what remains?

Jo has taught in Higher Education for over 16 years, prior to which she worked as a Graphic Designer and Freelance Illustrator. Jo now works as a Graphic Artist and her practice-based research explores the convergence of a number of interdisciplinary concerns, linked by the commonality of language.

Jo teaches across all levels of the Graphic Arts & Design Programme.

Jo is a PhD candidate in the subject area of Art. Her study, Rewritten/Remade Encounters: towards new intimacies within the deracination of the written word, explores how our habitual use of conventions denotes our compliant respect for language as well as an inherent need to be understood. Familiar limits mark out a territory for expression, governed by a complex code system, which is deciphered into letters, words and syntax in order to form meaning. This meaning is challenged by what lies beneath the surface; social conventions, arbitrariness, ambiguity and the unsaid. An inexhaustible range of conventions, which although designed to elucidate and help us find meaning, often highlight the impenetrable inadequacies of language. The interstice between the concrete presence of language and the ‘other space’ that language takes us, belies the nature of where and how intimacy is formed. What potential does the estrangement of these conventions have to allow us to suspend our formed relationship with language and consequently our role as an expectant reader, to become an uninformed viewer seeing language afresh? How dependent are we on our need for established conventions to access language within new contexts? Can investigations into the materiality of language help bridge the interstice between the concrete and the conceptual?