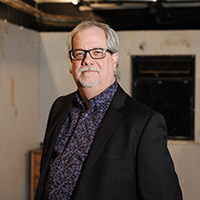 Having worked in academia for over 20 years, including previously being Head of Department at the University of Wales, Lampeter, Robert joined Leeds Beckett University in 2015 to lead research development in the School of Film, Music and Performing Arts. He also teaches film history in the Northern Film School.

His research interests cover postwar British cinema, gender identity in film, comics books, and children's cinema. He has published widely in these areas. His study of the Children's Film Foundation, which was supported by a Leverhulme Fellowship, have been published by Palgrave-Macmillan/BFI in 2015.

Robert’s research has focused mainly on the history of post-war British cinema with a particular interest in the work of key directors and on stardom. His book on Welsh star/producer Stanley Baker was supported by an AHRC award and his book on director Tony Richardson was published by Manchester University Press. More recent work has focused on children's media including an essay on Beryl the Peril and completion of his study of the Children's Film Foundation. This work has fed into current debates on the future of children's media in the UK.