At this time of year, the Leeds Beckett community usually turns its focus toward the City of Leeds Training College War Memorial situated on our Headingley Campus. 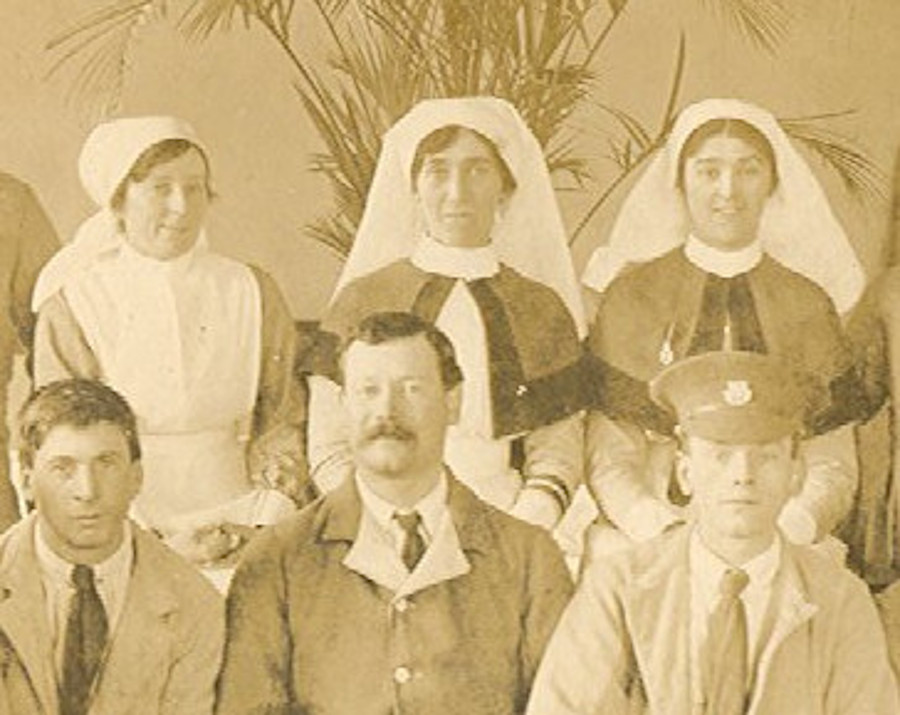 The ninety-eight-year-old memorial remains the most visible focus where remembrances can take place. Of course, this year there are no physical gatherings of commemoration. As was usual, in the early twentieth century, it is men listed for the sacrifice they made. Still, sacrifices, both physical and mental, were suffered by many forgotten men and women caught in conflict. There is another layer of untold stories, of women who played a significant part in the efforts of war. The 2nd Northern General Hospital at Beckett Park, our Headingley Campus, was staffed by a vast army of Nurses and VADs (Voluntary Aid Detachments). Their story is mostly unexplored. Women from disparate backgrounds converged here to administer medical know-how, care and compassion.

Like Ada Murgatroyd, a native of Bingley, who began life working in a Worsted Mill. Her nursing career started as a Nursing Probationer, a Sick Nurse, at the Royal Halifax Infirmary. On 7 August 1914 Murgatroyd was engaged as a Staff Nurse in the Territorial Forces Nursing Service at the Beckett Park Hospital, a year later promoted to Sister. From December 1917 to July 1919 she received a posting overseas to the Egyptian theatre of war, where for part of her time she was attached to the 69th General Hospital in Palestine. Murgatroyd was demobilised on 22 March 1919 after requesting permission to take up her civilian post in Bradford which had been kept open. Recognition of her service came through the award of the Royal Red Cross (2nd Class) and decoration by King George V on 8 May 1919 at Buckingham Palace. Because Murgatroyd had served abroad and the length of her service she was awarded the British, Victory and Territorial Forces War Medals. Despite looking formidable, contemporaries described her as capable, thorough, sympathetic and above all loyal. After the war she remained in the nursing profession and returned to her native Bingley, she died at the Elmhurst Nursing Home in the town on 11 May 1954 aged 75 years.

At the other end of the social scale, Elizabeth Alice Thompson-Pegge served at the Beckett Park Hosptial as a VAD Nurse; she joined the staff on 8 May 1915 at the age of 38. She was a woman of Private Means; most of her wealth inherited from her father's family who had made their money as Ship Owners. She had spent some time studying at Scarborough School of Art.  Thompson-Pegge's motivation for serving as a VAD may have been influenced by the tragedy that befell her younger brother, a 2nd Lieutenant in the Royal Garrison Artillery, who was accidentally killed by lightning while serving during the Boer War. Thompson-Pegge stayed in Leeds until a posting to a French Military Hospital in May 1917, she was still at work at Pont de L'arche near Rouen in May 1919. For her efforts, she was twice Mentioned in Dispatches. During WW2 she was Centre Organiser of the Scarborough Women's Voluntary Services for Civil Defence and in 1944 awarded an OBE.  Thompson-Pegge's maternal grandfather was the eccentric clergyman, William Thornber, who wrote the first history of Blackpool (variously described as a geologist, pugilist, author, alcoholic and philanthropist). Thompson-Pegge died on 17 May 1966 at Gordon House in Scarborough at 99 years old.