This week marks the start of Macmillan’s Cancer Talk Week, (20 – 26 January), a campaign which aims to break down some of the taboos around cancer and make it easier for those affected by cancer to engage in conversations about the disease.  In today's blog post, Karl Witty shares his experiences of talking to men with penile cancer. 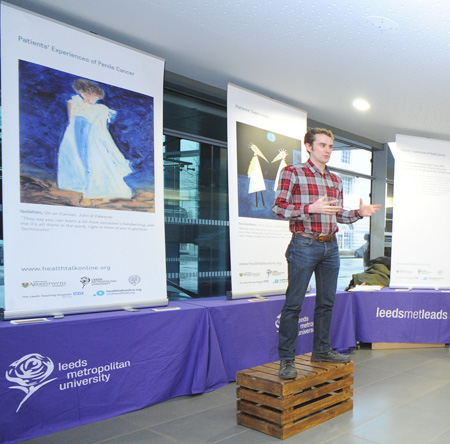 Image: Dr Peter Branney at an exhibition of art inspired by patients' experiences of penile cancer.

The word ‘cancer’ can instill many, healthy people with intense fear and dread. Some people may not like talking about cancer because they might find the topic depressing, particularly if they have lost a friend or relative to the disease. Yet, for those people who receive a cancer diagnosis, their family members, partners, colleagues and carers talking about the diagnosis and the impact cancer is having on their lives can be a valuable coping strategy. This point was made clear to me whilst speaking to men and their wives/partners about their experiences of Penile Cancer for an NIHR funded study entitled Patients’ Experiences of Penile Cancer (PEPC).

There are many different forms of cancer, each with different risk factors, incidence rates, symptoms, treatments and prognosis. Some cancers, such as Breast Cancer and Prostate Cancer are relatively common (there were 49,961 new cases of breast cancer in the UK in 2010, 99% of which were women; and 40,975 new cases of prostate cancer [Cancer Research UK, 2013]). Whilst talking about these diseases can be incredibly difficult, greater professional knowledge about the disease and greater public awareness can help dispel myths and tackle stigma. Cases of rare cancers can however, be dispersed over large geographic areas meaning expert knowledge, never mind public knowledge of the disease can be poorly developed and support to enable patients to talk to each other can be limited.

Penile Cancer is a very rare disease in the UK with approximately 500 new cases diagnosed each year. Whilst survival rates for the disease are high, with more than 80 per cent of men who present early-stage cancer living at least five more years, the physical and psychological effects of treatment can be profound. There is relatively little public (or professional) knowledge around penile cancer, and many men diagnosed will not have heard of the disease before, let alone spoken to someone who has experienced the disease.

The PEPC study, led by Peter Branney, aimed to collect men’s experiences of Penile Cancer through one to one narrative interviews which were recorded either with an audio or video recorder. In total 27 interviews were included in the analysis, with findings presented on the Health Talk Online website.

Many men find talking about their penis awkward at the best of times so for men to sit down with me and share their experiences of diagnosis and treatment of Penile Cancer was incredibly brave and admirable. Understandably, several of the men I spoke to found the process challenging, and many displayed intense emotions. But for many, talking about their condition, particularly with wives and partners was an important coping strategy, enabling them to seek acceptance and reassurances about concerns and anxieties they may be experiencing. After the interviews, some men told me that this was the first time they had talked about their experiences, highlighting the the feelings of loneliness and isolation which they were feeling.

After the interview stage of the study, we invited men who had been interviewed to take part in an evaluation event where they could review the new website and talk to other men who had been treated for penile cancer. Men attending appeared to be much more relaxed talking openly about their treatment, and told us how valuable it was to be able to talk with others who had been through similar experiences.