Juiced, produced and directed by Adam Marseille, and Man On Bike, directed by Matteo Palmas and produced by Camilo Angelo Verastegui, have both been shortlisted in the factual category and will receive a special screening at the Platinum Suite at Sheffield United Football Club on Wednesday 22 February. The winner of each category will progress to the national RTS Student Awards.

All three students are currently in their second year of the BA (Hons) Filmmaking degree at the Northern Film School.

Juiced is a 12-minute film about a man named Kurt and his use of anabolic steroids.

Adam explained: “The film is about steroids, but really it's about obsession, delusion and vanity. Steroids is just the front. The real star of the show is Kurt. I found Kurt while I was on holiday in Thailand in January, 2016. As I spent more time with him, I realised how much of a performer he was, but it was when he openly started talking about taking steroids, without a care in the world, that I realised I was going to make a film about him. He was perfect. 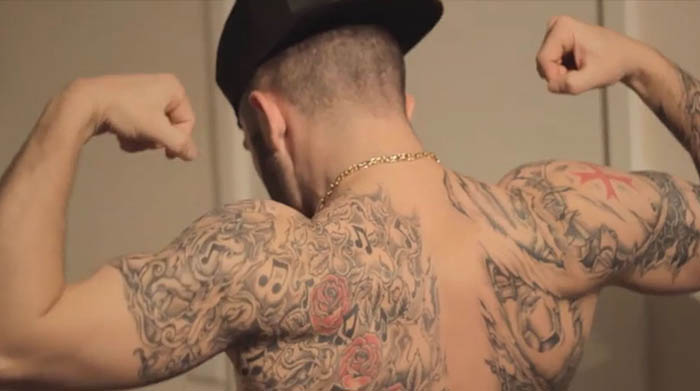 “In essence Juiced is a journey, a dark journey. A dark journey of the human experience wrapped up within the tabooed world of steroids. It's the world of NON-competitive steroid use, and therefore Kurt is a rather normal-looking guy. It will come as a surprise for many viewers to discover just how rampant steroid use is in British society.

“We try to look at why and get to the bottom of it. We discovered that Kurt was driven by some very dark, impulsive parts of the human psyche - vanity, obsession, addiction, delusion, insecurity, jealousy, violence, etc. Kurt's candidness makes it compelling viewing.”

Adam is studying abroad in New York for his second year of his degree. Originally from Huddersfield, he has travelled extensively and lived in South America for two years before starting at Leeds Beckett. Working on a film project in Rio is where he got the taste for filmmaking and the inspiration to go to Film School.

For more information about Juiced please visit the Facebook page.

Man On Bike is a nine-minute documentary about a man and his troubled, unconditional love for bicycles: a love that encompasses life and death.

Matteo explained: “With a makeshift workshop in his back garden, David looks like any other middle-aged dad with a sad hobby. But it turns out there is much more to it. David has darker, more profound reasons to spend so much time in the shed. Following a terrible accident and several weeks in a coma, David fights his fears day-in, day-out: polishing, fixing and rebuilding, finding his way through the darkness.”

Camilo said: “I was excited when I first heard about David and his charity as I immediately knew we had stumbled across someone very special. The fact he worked alone fixing forgotten broken bicycles and giving them away for free was what primarily caught my attention, but as the story behind his unusual endeavour began to unfold, a very clear and intimate connection between the man and the bike had flourished.

“What I noticed to be very distinctive of David is that recycling bicycles had helped him to restore his life in the same way. Giving them away became his own way to try and restore other people's lives. In other words, his goal is to fix lives one bike at the time. This realisation came after hearing about his cycling incident which resulted in as a long-lasting coma.”

Matteo continued: “Making the film was at times terrifying and incredibly rewarding. Man On Bike was my very first short film and, being a documentary, there was always a certain element of uncertainty involved. Even though we knew what we wanted, you never knew exactly what you could end up filming. But that revealed to be an invaluable experience; it’s something that made me take a new perspective and that will influence me as a filmmaker, but also personally. David is now a close friend someone we wouldn’t have known so intimately if it wasn’t for Man on Bike.

“I am now working on a drama for my second-year film, and I realised that it is not such a different world. Documentary, I found out, like fiction, is about finding the poetry within things. If you just look closer, people have gripping, moving, jaw-dropping, beautiful stories. They are just waiting to be unearthed. I don’t come from a film background: I was born in a small city by the sea, in South Sardinia, Italy. I know people here come from Media studies, but I studied Ancient Greek and History of Arts instead. When I approached documentary, I remembered what Michelangelo said when asked how he would sculpt his statues and he replied that it was just about getting rid of the unnecessary. The sculpture was already there, waiting to be discovered. He would do nothing else but free it. I believe film is much like that. It’s about freeing stories. And it’s also about putting people in another person’s eyes. If next time you see a bike, you think of David; we’ve made it, you’re ours.”

Camilo added: “I worked closely with the director throughout the production of the film so that we could correctly convey that theme, and I am very happy with the results. It is satisfactory to see how everything came together in the end. I have definitely developed an interest towards documentary in general, an interest I have not until very recently noticed I had. I see great potential in it in terms of education and artistic license, and I believe it is something I aim to explore further during my career. To me, documentary allowed me to gain unprecedented access onto the incredible life of an ordinary man, and it has opened my eyes to a new way of expression.”

Andrew Fryer, Dean of the School of Film, Music and Performing Arts, commented: “I am immensely proud, not only of the recognition from the RTS of the achievements of Matteo, Camilo and Adam in receiving nominations for this prestigious award, but also of the fact that this recognition is for films made during their first year of study at the Northern Film School. Both of the films are documentaries, which is particularly rewarding in the year that we launch our new Masters programme in Documentary Filmmaking, led by our own multiple RTS award winner, Martin Harris.”

Speaking about their RTS award nominations, Adam said: “It's an honour to be nominated, and I think we can all feel proud at the Northern Film School that we, as a film school, have produced two films which have been nominated.”

Matteo said: “It’s great to have been nominated for an RTS award. We are very proud and excited about it. We know that the School and the University has a good reputation in this award and we hope to bring it forward.”

Camilo added: "At the age of 13, when I took a leap of faith by moving from Bolivia to the UK as an aspiring film director, I remember often thinking I was striving for something that seemed very far-fetched. It wasn’t until recently when I, as an artist, finally gained the opportunity to try my hand out in filmmaking. Having now been nominated for such a tremendous award, I can not only look back with a smile but also, I can look into the future with the confidence to strive even further."