14 November 2017
Hollywood film, Mansfield 66/67, a collaboration featuring more than 100 students and staff from the School of Film, Music and Performing Arts at Leeds Beckett University, has been nominated for a prestigious Women’s Image award.

The film, which involved students and staff from dance, performance, music and film, is a documentary about the last two years of the 1950s screen icon Jayne Mansfield's life, and the rumours of the satanic curse that surround her untimely death.

It was released in January 2017 and has now been nominated for a Women’s Image (WIN) award in the Documentary Feature Film category.

Produced by Hollywood producers and Artists in Residence at the Northern Film School, Todd Hughes and P. David Ebersole, the film is a collaborative project with Larra Anderson, former Director of the Northern Film School.  Mansfield 66/67 was the key output from a University research cluster project entitled Creating the Exploded Documentary which was led by Larra, who also acted as one of two Directors of Photography (DoP) on the film.

Andrew Fryer, Dean of the School of Film, Music and Performing Arts, said: “I am delighted that our Hollywood film Mansfield 66/67, made at the Northern Film School here in Leeds as part of our Artist in Residence programme, has been nominated for a Women’s Image Award for Best Documentary in Los Angeles. Not only have 100 students from across the School of Film, Music and Performing Arts received their first professional film credit but they have also been featured in a Hollywood premiere, appeared in the cover article of Vanity Fair and are in the top 10 box office film list along with God's Own Country - that's a Yorkshire bonanza!”

Dr Sarah Bowen, Head of Animation at the Northern Film School and Animation Producer on the film, said: “Working for Los Angeles-based The Ebersole Hughes Company on exploded documentary Mansfield 66/67 was a wonderful opportunity for our Northern Film School Animation students. Under the direction of professional animator Elroy Simmons, keen students took on more than one role. Notably, James Gandy was ‘animation assistant’, ‘animator’ and worked on the sound breakdown while exchange student Venla Linna, who attended the August 2017 UK premier in Leicester Square, was an ‘animation assistant’, ‘animator’ and ‘principal background artist’. This exciting experience offered real work-based learning on a film that is getting great reviews through its US cinema distribution and world festival screenings. The WIN nomination is of course particularly significant for the female animators.”

The animation produced by the Northern Film School’s students has recently been featured by Animation World Network – the largest online animation and visual effects-related publishing group.

Larra, who was the film’s Producer and Cinematographer, said: “I am so very pleased that my former colleagues at Leeds Beckett University are having their work acknowledged in such a significant public forum as their talent, expertise and knowledge are at the very heart of the film's success. On top of that the fact that over 100 people from Leeds Beckett's School of Film, Music and Performing Arts came together to do the animation, music, dance, and performance sequences on this film is an amazing contribution of the university. This along with the fact that the film was performed and crewed by their inspired student body should all only add to the feeling of success that Leeds Beckett should proudly be sharing in.” 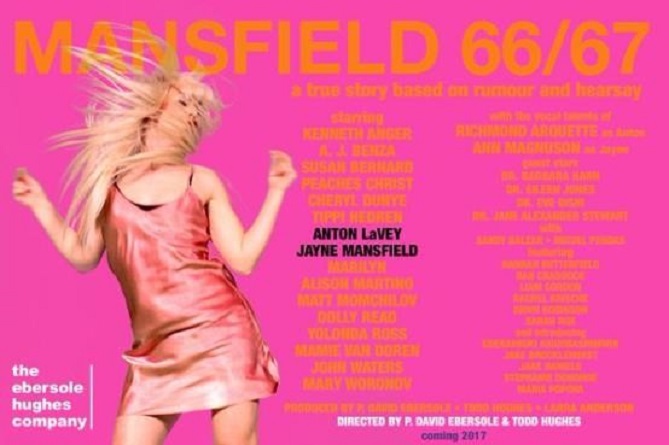 The film’s Directors, P David Ebersole and Todd Hughes, added: “We are extremely proud that MANSFIELD 66/67 has been enjoying a great success with a worldwide festival run and US release, and now has been recognized by The Women's Image awards with a nomination for Best Documentary. The significance is double fold, since the film is about a female trailblazer and was a team effort that included so many women from Leeds Beckett.”

Shot over 10 days at Prime Studios in Leeds, the film was post-produced at the Northern Film School and in our Headingley music studios.  Oscar-winning re-recording mixer, Ben Wilkins, flew over from Los Angeles to work on the film with our students in summer 2016 as well as receiving an honorary degree at Leeds Beckett’s graduation ceremonies.  He also presented a masterclass and workshops for Masters students.

The nomination follows a host of glowing reviews for the film and a recent feature in Vanity Fair, where a photo of our students and staff depicted the story on the magazine’s homepage.

Teresa Brayshaw, Principal Lecturer in Performing Arts, was commissioned to create material for a performance troupe who appear in the film and collaborated with performers Hannah Butterfield, Dan Craddock, Liam Gordon and Dawn Robinson. This company, all MA graduates from Leeds Beckett, have regularly performed with Teresa in a range of international festivals, including the Edinburgh Festival with ‘A Gift for Demarco’, ‘Sounding Out’ and ‘Love Lines’ at Headingley Literature Festival and ‘Shakespeare’s Sonnets’ at the Sibiu Festival Romania.

Teresa explained: “The opportunity to be involved in creating material for Mansfield 66/67 was a new departure for us as our work is mostly for live theatre and performance audiences – and we had a brilliant time working with the staff and students from the Film School and learning how to transfer our material to film.”

The WIN awards were established in 1993 in the United States by the Women’s Image Network, with the aim of promoting gender parity and to celebrate men and women who create media which increases the value of women and girls. WIN presents its awards in Hollywood and relies on entertainment industry collaborations to draw audiences to excellent media.