Fifty-seven participants whose ages range from 63 to 68 were inspired to take on the mammoth feat by the heroism of those working in the NHS.

The group of LBU alumni - who all trained to become teachers - pledged to take part in the challenge organised by Pete Platt between 11 April and 9 June to help raise money for NHS Charities Together.

From clocking up miles on a rowing machine in a conservatory to walking short distances and cycling around Yorkshire, the Scottish Borders and even Australia, everyone in the group contributed.

This came despite several members suffering from health and physical conditions, including knee, shoulder and hips replacements, arthritis, and heart issues, which have all been treated by the NHS.

On Tuesday (9 June), Phil and Elaine Taylor (pictured above) brought the challenge to an end – fittingly crossing the finish line at the new Carnegie School of Sport Building on Leeds Beckett’s Headingley Campus where it all began.

The group covered 15,612 miles in total – the equivalent distance from Beckett Park to Land's End, then John O'Groats and back to Beckett Park nine times – with the group raising £6,275.

Phil and Elaine Taylor, from Pudsey, who finished studying at what was then the City of Leeds and Carnegie College in 1976, said:

“As young students, we were fortunate to be given the opportunity to train at the outstanding PE teaching training college, with a worldwide reputation for excellence.

“Little did we know, at the time, that being part of this establishment would develop our desire to make a difference to the children and students that were entrusted to our care. High standards of teaching and the values instilled in us were fundamental to the Carnegie ethos.

“Living on campus enabled friendships to be formed that have lasted a lifetime. This has been further developed by our many organised reunions, family communications and the ongoing support we give to each other when needed.

“Our thanks to Pete Platt for this challenge. It has given us the opportunity to work as a team again to support our wonderful NHS.

“Where better to finish our Challenge - but where it all started, here at Carnegie nearly a lifetime ago.”

The friends all met whilst studying to become teachers at the City of Leeds and Carnegie College between 1971 and 1977.

Enjoying careers that have taken them across the globe, the group have stayed in touch holding regular reunions because of the values, principles and camaraderie they share, calling themselves the “Carnegie family”.

Elaine and Phil finished the last leg of the challenge, arriving at the new Carnegie School of Sport Building on Leeds Beckett’s Headingley Campus at around 10am.

The state-of-the-art building was handed over to the university from its construction partners the previous week.

Key features of the £45m building include a covered rooftop 60m sprint track for performance training and analysis, dedicated research laboratories and a health and wellbeing studio.

Pete Mackreth, Dean of the Carnegie School of Sport, said:

“It was fantastic to welcome Phil and Elaine back on to campus for the culmination of their challenge.

“We have been inspired by the efforts of these graduates. It shows their values of camaraderie with each other and empathy for those around them, values they credit as being instilled in them during their time here.

“I was also delighted to take the opportunity to show them the facilities of the new Carnegie School of Sport building, which will help to educate the next generation of Carnegie graduates.” 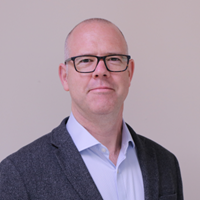