Charmaine Roche was the driving force behind a CollectivED symposium held on the 23rd June.  Charmaine is a PhD student at Carnegie School of Education and a member of the CollectivED Advisory Group. 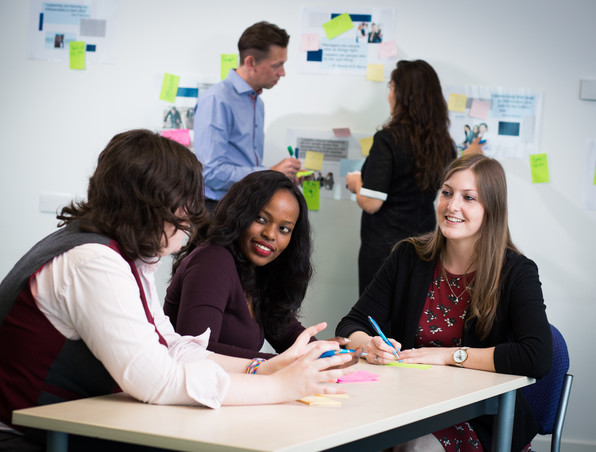 In this blogpost (first published  here) Charmaine reflects on the symposium which she co-hosted with  Professor Rachel Lofthouse, Director of CollectivED, and which took the form of an appreciative inquiry.

This blog is not so much a report as a series of new questions inspired by my reflections following the highly successful and generative ‘Can we be the midwives of our own future?’.

My overriding question is: How do we find a unity of purpose, along with the courage to take on those who would prefer the status quo, or a return to it? Because right now a return to business as normal is being contested but change is not inevitable. Disruption is often required to push change forward. Systems tend to return to stasis after any attempt to create a shift or after a crisis.

The appreciative inquiry question underpinning the symposium was;

What are the imperatives and opportunities for change in the education system created by the covid19 pandemic?

How did our participants, answer?

They identified the fiercely held values that underpin the imperatives for change. The values of; equality, inclusion, diversity anti-racism, community, cooperation and collaboration, compassion and empathy.

Are these not moderate, reasonable demands? When leaders and policy makers ignore dissenting voices and only speak to and reward those who agree with them, moderate demands become revolutionary.

The opportunities for change have come out of renewed connections with families and individual children who have engaged differently with online learning; learning that has become more embedded in the culture of family life, not just farmed out to the professionals. We call for a creative, exploratory, knowledge rich and human centred curriculum.

The ‘pause’ or vacuum created by the pandemic has been filled with creative solutions born out of necessity giving a new sense of agency and autonomy to professionals.

We want an education that connects the child, with others, with their community and the world. We will think about how we listen and we it means to actively listen, how we enable this, through the arts and activities. We will create safe spaces for all voices, especially dis-empowered groups.

We will know we are successful when our country is led by people from all backgrounds and not just an elite minority of privilege, when children are not only “achieving” academically as a result of schooling but emotionally and socially as well – flourishing, when we feel both valued and truly heard.

We recognised too some of the ‘monsters ‘of our time.

Questions about curriculum and the purpose of education in our world faced with such pressing issues as systemic racism, child poverty, increasing disparities between the rich and the poor, rising tide of mental health issues and the climate crisis.

In a society deeply divided between the ultra-rich and privileged and the poor, schools have become centres of welfare for some of our communities. Delivering school lunches to children for whom school is the only place they are guaranteed one full meal a day. Access to adults who care for them and who will keep them safe. Schools are expected to do this but not respected by policy makers for this role.

How has this happened?

Why is there such a push to put education professionals back into their boxes as we begin to emerge from lock-down. A concerted press campaign to present the profession as loafers and spongers taking an extended holiday during the pandemic was as much a feature of lock-down as the unbroken efforts school leaders and teachers have put into getting online learning up and running, keeping in touch with families, setting and marking work as well as looking after the children of key workers.

Now the giving of extra catch-up funds is being awarded without trusting schools to decide how best to use it, instead suggesting punitive and corrosives means of monitoring; England stands alone in the UK not to extend the pause of inspections so allowing schools to focus on the health, safety and well-being of learners and staff. Online monitoring of learning and progress is to replace onsite visits.

For what purpose? Are we really training and paying salaries to professionals who require this level of surveillance and judgement to keep them in line?

I smell the fear of change from leaders who are showing up as inadequate for the challenges of our time. Trying to push us back into the box of business as usual.

As a society, will we fall for it and go back to shopping? Commuting? Eating out? Going to the pub? Numbing ourselves again.

If we call this out for what it is, bullying, oppressive and destructive how do we respond? How do we resist? How do we get a voice around the table and make our voices heard?

We will create an education where all will flourish and thrive. We will support our leaders. We want to be different. We don’t want to go back. Inclusion first and inclusion for all.

In my opening remarks to the event I drew inspiration from the way in which the #BlackLivesMatter movement has been reignited and drawn strength during the pandemic out of the resistance triggered by the killing of George Floyd at a moment when we were all looking. Black, brown, and white people alike are facing up to the systemic injustices which have been laid bare by the ravages of the virus. Making connections between this and the ways in which we are all being ruled.

People are finding the space to have uncomfortable and necessary conversations. Considering what it is to undo the work of social conditioning that covertly supports assumptions of superiority based on race, these conversations will need to continue for a long time to come. Just as we have begun these conversations in relation to gender because of the #Metoo movement and sexual diversity, not through choice but through resistance to the brutality caused by such assumptions of superiority and the impunity that goes with it.

What would happen if we imagined a future where there is a guaranteed living income for all, our education system promoted active citizenship so that this was part of how we contribute to equity, giving back to society where it is most necessary whether or not we have paid employment?

What could schools become if every community had access to fully funded mental health services?

Where the arts were fully funded along with local libraries, youth clubs and activities that really support all our young people to feel valued beyond the school gates?

Where the curriculum encouraged engagement with the pressing issues of our time in ways that made leaders, engineers, scientists, artists, entrepreneurs, crafts people, public servants and ethical political leaders, of our young an army dedicated to serving a vision for a sustainable life on a planet with finite resources?

These are the questions I heard buzzing in the digital air of our conversations on the 23rd.

But I also heard fear. The fear born of an erosion of collective action in our profession, the erosion of trust and agency, the lack of unity and solidarity on issues related to future direction.

Russell Hobby in his blog Unstoppable Forces raises some very pertinent questions. He talks about the power that a few head, united around a moderate and reasonable cause could have. Just getting the conversation onto the table, having a voice at the table would be a start.

Remove the competitive and aggressive elements of school accountability

Just as the #BLM movement has forced the issue of systemic racism onto the table through collective action, could we, a brave band of brothers and sisters not initiate some non-violent civil disobedience against a return to the social policies that make inevitable a continuing rise in child poverty, that must inevitably follow the economic crisis brought on by the pandemic? Likely also to be intensified too by a no deal Brexit. Rising unemployment and homelessness if the moratorium on evictions is lifted which will engulf already fragile communities and their schools. Could we all stand together in support of these communities and the schools that serve them, wherever our own particular school and communities stand?

We can only dream about what standing up overtly for this issue might create in terms of a momentum for change. Is it the time for for covert resistance (already well documented by research) to pass over into overt action?

Perhaps we will gain the influence, voice, and power we need to transform education through standing on broader issues of social justice. Standing up to change what we have helped to normalised by filling the gaps. Schools are now as much welfare centres as places of learning. But we are not fully resourced, respected, or recognised for this role.

Perhaps we could become rich centres of learning (rather than centres of training for tests and exams) if our leaders were able to do their jobs of serving us all rather than privileging the already privileged?

Build a system built on trust.

What could be more moderate demands?

Perhaps educationalist have to become political in order to lift education out of the domain of politics where we should be alongside a future depoliticised #NHS, both joining the Bank of England. Independent of the five-yearly circus of electioneering and seemingly arbitrary reforms. Another, final, moderate demand.

Can We be the midwives of our own future?

How can we/I contribute to social change?

The answer is in our hands.

CollectivED has committed keeping this conversation going I have pledged to convene those who expressed an interest, and new voices who wish to be heard in this new community of practice.

Charmaine Roche is an Accredited Executive Coach, Education Consultant, and Life Coach. Her website is www.lifeflowbalance.co.uk and her twitter account is @lifeflowbalance. She can be found on LinkedIn and you can sign up for her podcast ‘Speak Up Speak Out’ here.