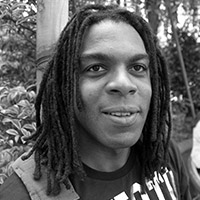 Che's career as a games developer and creative within digital interactive technologies covers the early 80’s home computer industry, time based media and re-active art installations to the development of terrestrial and satellite digital Interactive TV services for broadcasters that include Sky and the BBC.

His interest in moving image, digital media and live video performance has seen his work performed/exhibited internationally at events such as the Big Chill, ICA (Playlouder), Bestival, Ministry of Sound (Asia tour), Creamfields, Exit Festival as well as residencies and exhibitions in and around London/Europe.

He has been involved in several high profile digital media projects/commissions, and worked a creative consultant for various events; recently, technical design & production of a HD live event for the international launch of LG’s Scarlet TV and in 2007.

Notable recent work would include ‘Frictions of Distance’ at the Iniva Gallery, featured on the BBC’s flagship Digital Technology programme Click (Digital Planet) and performing and running/developing workshops for ‘Industrial Resolution’, as part of the Manchester International (MIF) Festival.