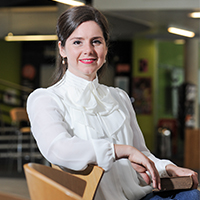 Dr Gráinne Goodwin is Senior Lecturer in History and course leader for the MA Social History. Her research focuses on the intersections between colonial encounters (specifically in British India), cultural production and gendered experience in the late-nineteenth century.

Gráinne's work has centred on critical late-Victorian figures such as the memsahib and novelist Flora Annie Steel and the social reformer Behramji Malabari, both of whom made important interventions on gendered notions of colonial modernity during the British Raj. Her work on these figures engages with current debates within new imperial history on the relationship between colony and metrople and on colonial networking. Although historically grounded, Gráinne's research is interdisciplinary in approach, utilising and contextualising colonial journalism, novels, business correspondence and print ephemera. This interdisciplinarity is reflected in her most recent project, which uses book history and histories of travel and tourism to analyse Victorian guidebooks and their publishing processes.

Gráinne teaches on modules at all levels of the undergraduate History degree including:

She is also Course Leader for the MA Social History and teaches on the MA modules Researching Cultures, Journeys and Discoveries and the Dissertation.

For more information about or to express interest in studying on the MA Social History you can contact her at g.goodwin@leedsbeckett.ac.uk

Drawing on the world class Murray Archive at the National Library of Scotland (NLS) she is investigating the evolution of the Victorian guidebook and has delivered a public lecture on the Murray Handbook series at the NLS, Edinburgh. Her research approaches the handbooks as key texts of modernity. Her work locates these texts of travel and tourism alongside fundamental publishing, literary and socio-cultural developments in nineteenth-century British, European and imperial history. She is working on a book project about these guidebooks with Dr Gordon Johnston entitled Travel Guides and the Modern World: John Murray’s Handbooks for Travellers, to be published with Manchester University Press.