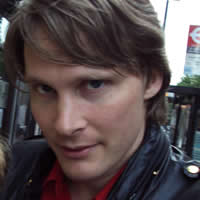 Sean Ashton studied sculpture at the Royal College of Art (1995-97) and Fine Art at Goldsmiths (2000-04), where he completed a Ph.D focusing mainly on the readymade. He writes fiction, criticism and poetry. From 2007-2011, he was associate editor of MAPMagazine, and since 2012 has written for Art Review. 2017 sees the publication of his first novel, Living in a Land (EROS Press), a memoir written from the perspective of someone who can only construct sentences in the negative. In 2007 he published a volume of short stories, Sunsets and Dogshits (Alma Books), a collection of reviews of imaginary artworks and books. Sean Ashton has no consistently recurring ‘research interests’, other than the desire to work under certain constraints. This is evinced, not just by the aforementioned novel, but by several short stories that have appeared in various publications: ‘Mr Heggarty Goes Down’, Collapse Vol VIII, ed. Robin Mackay (Falmouth: Urbanomic, 2014) ‘Panpoons’, Artenol, ed. Zinovy Zinik (New York: 2015); ‘The Picture of Cary Grant’, Suspicion (London: Jerwood Foundation, 2016); ‘Passenger Cranford’, Tegel: Speculations and Propositions (Berlin: The Green Box, 2013); and ‘The Second Room’, Thirteen Blackbirds Look at a Man (Cardiff: Chapter Gallery, 2015). Protagonists include a professional air passenger paid to remain airborne (‘Passenger Cranford’), and a group of men paid to stare continuously at an object to verify its existence, in a parody of Idealist philosophy (‘The Second Room’). His second – and hopefully forthcoming – novel, The Way to Work, features a protagonist trapped on a train of infinite length, on which he can only travel forward, the story being an account of a ‘journey within a journey’. More recently, Ashton has published poems in Poetry London, Magma, Artenol and Poetry Salzburg Review. As a poet, he adopts lyric personae rather than converting his own ‘true’ experiences into verse. He is interested in how the formal nature of composition produces an alternate rather than authentic self, while still insisting on the egotism that inheres in the term ‘poet’. This bio has been written by Sean Ashton and made to sound like it’s been written by someone else.