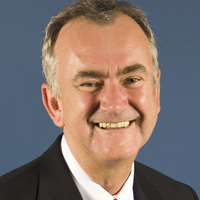 Paul joined Leeds Business School in 2013 after over 30 years of business experience. Since joining he became Course Leader for Accounting and Finance undergraduate course in 2015, and the Course Director in 2017.

Paul qualified as a Chartered Accountant with Price Waterhouse in London and spent 8 years with them including a year on secondment in Bologna, Italy. He helped create a new accountancy practice in 1985 which became the fastest growing in the UK. When this merged with Grant Thornton he pursued a career outside the profession, initially in the property and software fields and more recently as a business coach advising both big and small business owners. This coaching role led Paul to an interest in teaching and therefore a desire to share with students.

Paul is currently delivering modules at both Level 4 and Level 6 on the Accounting and Finance undergraduate course.

Paul is currently researching the topic of Integrated Reporting ('IR') and in particular its relevance to government Local Authorities. Paul is of the view that if IR were to be adopted in Local Authority reporting decision making by those bodies would change and our understanding of the value created would be different.