26 January 2017
Four of Yorkshire’s brightest entrepreneurial sparks got to hear all about success from one of the region’s top tailors whilst receiving their Leeds Victoria Business Boost competition prizes.

Speaking at an event for aspiring entrepreneurs, enterprise students and early stage businesses, James Michelsberg discussed how he set up his bespoke luxury Savile Row-style suit company, Michelsberg Tailoring, at Leeds Beckett University’s Enterprise and Innovation Hub more than 10 years ago.  He is now based in the prestigious Victoria Quarter offering bespoke made-to-measure services.

The Leeds Enterprise Network Event was organised by Leeds Beckett and hosted at The Yorkshire Post offices on Whitehall Road in Leeds.  The event was sponsored by the Business Enterprise Fund, who spoke about how entrepreneurs can access finance for their business venture.

Leeds Beckett and Hammerson’s four Leeds Victoria Business Boost competition award-winners were presented with their awards by James Rogers of Hammerson.  The property developers, who ran the competition in partnership with Leeds Beckett, are behind the new Victoria Gate and John Lewis developments in Leeds.

The top prize of £2,000 was presented to Ben Barker of Artemis Brew Cold Brew Coffee.  Set to be the next big thing in the UK, Ben impressed the judges with his healthy cold brew coffee products.

Sarah and Benjamin, Your Nest

Speaking about the award, Benjamin said: “It was an amazing feeling to be selected as one of the final eight for the competition, not to mention actually coming third.  It is very hard to pitch a letting agent as an innovative company as (and let’s be honest) there’s a lot of us; but I am happy to say that our new processes and plans for new technological innovation made us stand out to the judges.  The prize will surely help our brand awareness and help us be recognised by larger companies looking to partner on bigger projects. The prize money will also be put to good use and help boost our online presence as we approach our busier period.” 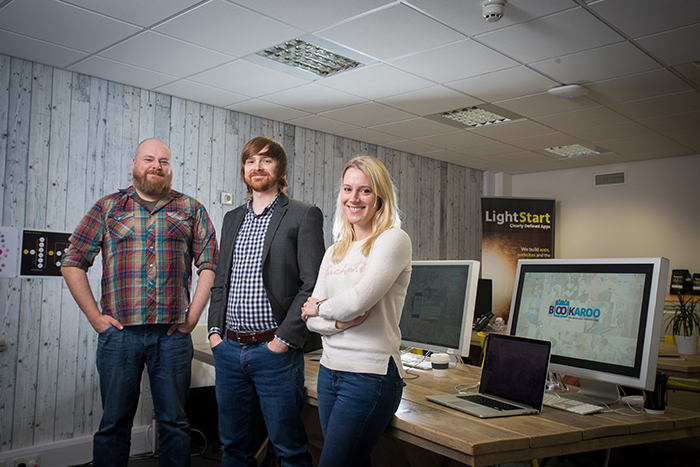 Simon (pictured above, centre), whose company, LightStart, was the first business to move in to the University’s Digital Hub, said: “At LightStart, we primarily build apps but also corresponding desktop websites and all the infrastructure that supports an app. As well as working with clients, we have many projects of our own; Bookaroo is the one that we are putting the most energy into. Our next goal is to further validate the idea of the app and we will be using some of the prize money to carry out focus groups in December to make sure that our app fits with what the market is looking for. We will then be recruiting early stage users of the app so that 3000 users will be notified when it officially launches in March 2017. Once it has launched, we then want to secure investment to grow the team.

“We’ve got a long relationship with the Enterprise and Innovation Hub at Leeds Beckett. Through the Hub, we have worked on a cycling app project with Leeds Beckett and City of York Council called Cycle Yorkshire; and the Hub has continued to recommend clients to us over the years.”

All four winners also received a half-hour business review, £1,000 accountancy and tax support from WGN, a digital and IT Review from Microsoft, an invitation to join the Institute of Directors 99 Club, a year’s free membership with the WNY Chamber of Commerce and a registered business address with Leeds Beckett’s Enterprise and Innovation Hub which is free for the first six months.

Fran Parkinson, Operations Manager, Enterprise and Innovation Hub at Leeds Beckett, said: “It has been an absolute pleasure to work alongside James Rogers and Hammerson to deliver this competition and we are very grateful for their support for enterprise.  We are delighted the competition has been such a success and would really like to thank them for their generous prize awards.  We wish them every success with their exciting new developments in Leeds.”

Speaking about the competition which was delivered by Leeds Beckett, James Rogers, Community Executive for Hammerson said: “Thank you to Leeds Beckett for delivering such a fantastic, well-organised and professional competition.  It really has been a great experience working with Leeds Beckett and the Enterprise and Innovation Hub to deliver this competition.”