An inspirational series of international guest speakers, including poets, fashion designers, artists, architects and filmmakers, is set to launch on Monday 3 October at Leeds Beckett University. The annual, year-long, INSIDE/OUT programme, hosted by Leeds Beckett’s Leeds School of Arts, features a range of high-profile art practitioners from across the world. All sessions are free and open to the public.

Launching this year’s series will be Nathaniel Mellors, Senior Lecturer at Leeds Beckett, who will screen his 2016 film Ourhouse, Ep – 1: Time. Held at the University’s city centre Rose Bowl building, Lecture Theatre A, on Monday 3 October from 6 to 8pm, the screening will be followed by a talk from Nathaniel on the making of the film. The film series presents a wealthy European family who are unexpectedly confronted by a mysterious manifestation, ‘the Object’, which suddenly appears in the living room of their country home. This imposing figure seems to have a profound effect on the conduct of each individual family member. In episode -1: Time, the family find themselves inundated by Neanderthals.

Simon Morris, Professor of Art at Leeds Beckett, commented: “Our mission for the prestigious INSIDE/OUT lecture series is to bring the best minds of our generation to inspire and support the practice-based research students and staff do across the Leeds School of Arts. To this end, we have flown in renowned speakers from Los Angeles, New York, Amsterdam, Brussels and Darwin. In order to enhance the cultural life of Leeds, we make the lecture series open to the general public and available to an international audience online.”

Continuing the series on Thursday 6 October will be New York artist and publisher James Hoff, who will discuss his own art work and his non-profit company, Primary Information, which he co-founded in 2006. Primary Information is dedicated to printing artists’ books and writings, and out-of-print publications and editions. 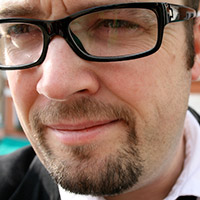