08 November 2017
An event which tackled the question of how the Leeds's bid for the European Capital of Culture title would create a lasting legacy for Leeds, embrace equality and tackle the disconnection of a two-tier city, has been held at Leeds Beckett University.

The event, at the University's Rose Bowl building, saw Anita Morris (Chair of Leeds 2023 Marketing & Communications Advisory Group), Cluny Macpherson (Chief Officer for Culture & Sport, Leeds City Council) and Tracey Lancaster (Deputy Vice Chancellor at Leeds Beckett) in conversation, as they discussed the importance of the competition for the Leeds city region's regeneration, enterprise, employment and international business and tourism profile as well as the city’s external image and reputation.

Speaking at the event, Cluny Macpherson said: "In Leeds, in the culture sector there isn't a great history of business sponsorship or engagement with culture for a variety of reasons.  However, our Leeds 2023 bid has changed that with fifteen sponsors already secured and a number of others to be revealed if we are shortlisted.  The process has meant that we now have relationships with big businesses who want to be associated with a big ambition for Leeds and the region.

"For the people of Leeds, we have done a really extensive programme of engagement work.  Even following Brexit, people's enthusiasm for the bid was not dented at all as the bid is a great opportunity to shout about Leeds and our pride in the city."

Tracey Lancaster added: "For Leeds Beckett there are a number of reasons why we are involved in the bid.  The first is around the power of culture in its broadest term as a unifying and inclusive force to bring together communities.   Secondly, there is enormous value in raising the profile of our city and there are clear benefit that the bid brings to the city, the university as well as more diverse opportunities for our graduates.  Finally, our reputation in culture and engagement in culture through academic practice is huge and therefore the bid process gives us the opportunity to enrich our teaching and academic practice."

Panel discussion about the bid at my university !!@Leeds Beckett #Lbsevents pic.twitter.com/iNE445PLi2

Leeds Beckett University and its staff and students have been long-standing contributors to the cultural life of the city.  As an academic partner for the bid, Leeds Beckett is working collaboratively to ensure Leeds becomes the next European Capital of Culture, as official partners for the Leeds 2023 bid. The European Capital of Culture initiative is designed to highlight the richness and diversity of cultures in Europe and raise the international profile of cities. If Leeds wins the title, it will follow the likes of Barcelona, Lille, Amsterdam and Istanbul in being recognised as a major centre of culture.

Helping to shape Leeds as the best cultural city in Europe and beyond, Leeds Beckett is providing ongoing expertise for the bid from our artistic, marketing and community engagement professionals as well as supplying vital research to help steer the bid.

Talented Leeds Beckett staff and students recently performed at the official bid submission celebration, whilst BA (Hons) Events Management staff and students are part of the bid team.  BA (Hons) Public Relations students have also been working hard to support the bid through consultancy research, whilst  Sam Nicholls from the School of Film, Music & Performing Arts has been working on the bid's Artistic Programme.

Sam Nicholls, Senior Lecturer in the School of Film, Music & Performing Arts, has been a part of the Artistic Programme Steering Group since its inception in September 2015. Chaired by James Brining, Director of the West Yorkshire Playhouse and featuring a diverse range of representatives from charities to corporate players, this group have been tasked with setting the agenda for the cultural content of the bid. 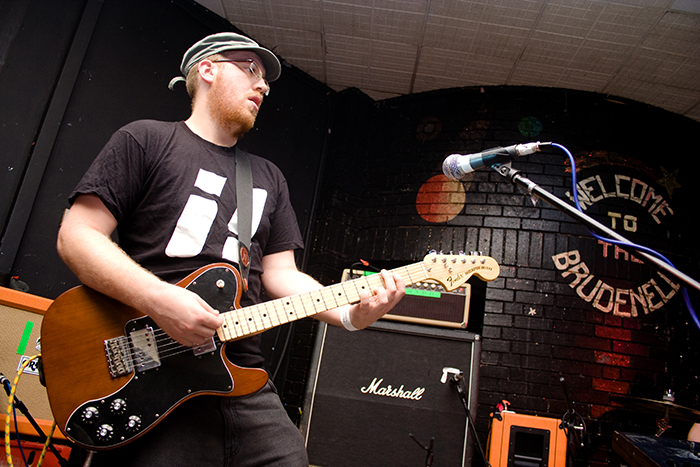 A lot of people were involved from the start, Sam says: “We are very different in the scope of our consultation. We’ve heard that other cities just put a few bid writers in a room and knock it out in a couple of months. We have a panel of 80 people from across the city and it has taken us years. It has made the process more challenging, yes. But hopefully the end result is representative.”

The scope of collaboration involved has meant that decisions were often hard-fought: “We bickered and argued for what we felt was important for the diverse artistic community to represent. Then Leanne Buchan (Leeds City Council) did an excellent job of representing it in a coherent manifesto. And it really flows together across our four themes: Fabric, Fear AND Belonging, Voice and Room."

“As a partner, Leeds Beckett University plays a unique role in this process. Our university has 600-700 music students, staff and students taking an active role in music across the city, as well as having a major venue on campus. So we play a part in cementing the role of music in the city in that way. But we’re also unique in the way we work with so many different types of people and organisations: colleges, festivals, commercial organisations, charities, radio stations, professional musicians, students. So we can open up those networks and act as advisors and facilitators to the process as well as being active participants. And as a university we have a national profile, we have the ability to shine a light on what’s going on in the city. As well as providing a base and JAMES accredited facilities for individuals to create from.”

Last month, the team behind the Leeds 2023 Capital of Culture bid, revealed ambitious proposals including a full-size lighthouse, transformative plans for Leeds’s South Bank and a festival curated and run entirely by the city’s children.  The Bid Book outlines 50% of the proposed Artistic Programme and will include more than 40 projects covering dance, music, visual art, theatre, large-scale installations, festivals and architectural projects.

Among the projects suggested in the first phase of proposals is a full-size lighthouse on Leeds South Bank and the ‘I Predict A Riot’ festival which will be curated and run entirely by primary school age children.

Leeds will find out if it has been shortlisted early next year, which will trigger a second phase in which the panel’s feedback will be taken on board and improvements and developments made. The chosen city will be announced in Spring/Summer next year.