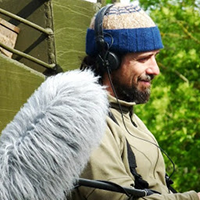 As a production sound engineer, Alex has worked with directors including Ken Loach, Michael Radford, Leslie Manning and most recently, Shola Amoo on the narrative feature-film “The Last Tree” (Nominated for the Sundance 2019, Grand Jury Prize in World Cinema and distributed by Picture House in the UK) He is currently working with director Dylan Williams (Men who Swim) on a feature documentary for the BBC.

As a stage sound engineer, Alex has also worked as Senior Touring engineer with the Royal Shakespeare Company and as Head of Sound / Sound Specialist with Cirque Du Soleil on a number of their international touring productions.

His collaborations with visual artists include Rosalind Nashashibi and El Anatsui.

He is a graduate of the National Film and Television School and The Northern Film School. He is also an alumnus of the Banff Centre for the Arts Audio Engineering Practicum residency where he researched studio and location-based surround sound recording methods, working with Grammy Award-winning mentor, David Gleeson (Celine Dion, Mariah Carey, The Lord of the Rings trilogy, Fight Club).

Projects Alex has worked on have been screened and exhibited widely, including BBC, Channel 4, MTV, Venice Biennale, Cannes, Sundance, The Guggenheim Museum & MoMA.

Alex is a Fellow of the Higher Education Academy (FHEA), a member of the British Academy of Film and Television Arts (BAFTA) and the Audio Engineering Society (AES).

Alex’s research interests centre around developments in immersive and surround sound technology and their impact on the aesthetic considerations of sound design.

Taking into consideration the semiotic aspect of how sound is perceived, his research asks the question, with the widespread adoption of surround and immersive technologies in audio-visual media delivery, how are sound design aesthetics engaging with the dimensional expansion of the audio canvas?