A previous post highlighted the somewhat forgotten history between Leeds Beckett University and the original Leeds College of Art, and consequently the University’s legitimate claim of Henry Moore as part of its heritage. Moore’s legacy in Yorkshire is extensive, a permanence which is especially apparent with the eponymous Henry Moore Institute located on The Headrow in central Leeds. 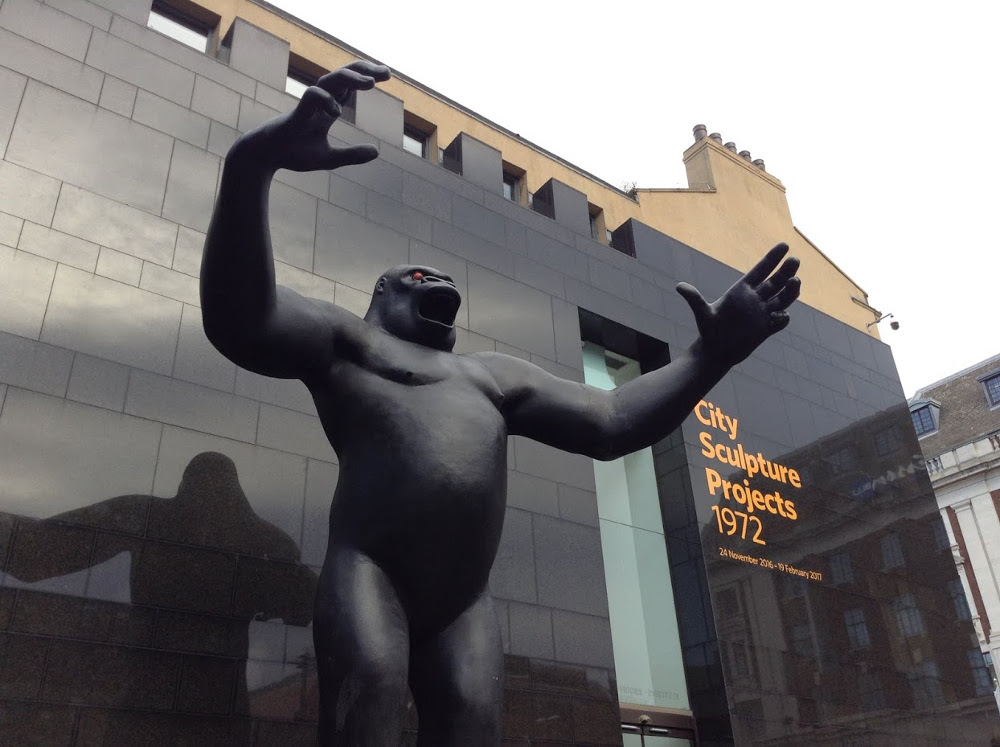 It was outside the Henry Moore Institute in 2016 that a rather irregular visitor appeared. On the morning of 14th November 2016 a five metre fibreglass sculpture of a gorilla was craned into place, occupying a commanding position at the front of the building. The sculpture in question was by Nicholas Monro, and it had a very interesting history. Loaned to the Institute as part of the ‘City Sculpture Projects 1972’ exhibition, the gorilla began life in May 1972 as an art installation at the Bull Ring in Birmingham. It was loaned to the midlands city as part of a national initiative encouraging the public appreciation of art through sculpture. Different cities were to bid for the right to host various works on a six month basis, with the hope that at the end of the period the sculptures would be purchased. Monro’s sculpture was officially called Gorilla but almost everyone since that time has simply known it as King Kong. Its residency in Birmingham’s Bull Ring did not last the expected six months, as even though the public seemed to warm to him, the city’s councillors could not be persuaded that it was a worthwhile investment.

From here the sculpture led a bizarre nomadic existence. It was firstly sold to a Birmingham second-hand car salesman called Mike Shanley in September 1972. He displayed King Kong as a publicity tool on his car lot for four years. During this period it was also loaned for a very short time to Birmingham School of Architecture, a part of Birmingham Polytechnic. The final move within Birmingham came when Mike Shanley moved his car lot to a second location in 1976 and King Kong moved with him. Next the sculpture was sold in 1976 to a market entrepreneur called Nigel Maby for £12,700. Maby transported his new purchase to Ingliston Market in West Edinburgh where the sculpture acted as excellent publicity and a useful meeting place for lost children. After almost thirty years, King Kong was then on his travels again. Nigel Maby died in 2004 and his widow Lesley took over the business. In 2005 the Edinburgh market was forced to close and she took the sculpture back to her base in Penrith, Cumbria. Between 2005 and 2007 King Kong was out of public view, but later that year he was erected at a new market location in Penrith.

The market closed in 2011 and the sculpture became neglected and in a sad state of disrepair. By 2013 the land on which it was stored had changed hands and the sculpture needed to be moved once again. This time Lesley Maby decided that the perfect spot would be her garden in rural Cumbria. After sympathetic repair work King Kong was once again back to its former glory and Maby’s garden has been its permanent home ever since. It was from here in November 2016 that the Henry Moore Institute borrowed the sculpture for the City Sculpture Projects exhibition until it was returned again in March 2017.

I have something of a personal investment in this story as Monro’s Gorilla is a sculpture I have admired for many years. I first became aware of it a long time ago when grainy footage of its time in Birmingham’s Bull Ring was broadcast as part of a documentary. My interest gained momentum during the 1990s when internet forums opened up personal testimonies on the sculpture’s history which had been hitherto only locally known. However, with this new information came false leads, half remembered truths, and muddled dates.I was fortunate that my interest allowed me to connect with staff at the Henry Moore Institute who invited me to collaborate on a journal article charting the history of the sculpture. It was here that I began to understand that much like our University’s connection with Henry Moore himself, the threads that bind history together are often either overlooked or misunderstood.

My research solidified many dates in the timeline of the sculpture. It also helped to place people in locations and situations which were previously subject to myth and speculation. For example, it was widely believed that the sculpture stayed a minimum of six months in the Bull Ring in Birmingham, but a TV interview dated in September 1972 places it at a new location after just over four months. Another example was the sculpture’s brief sojourn at the Birmingham School of Architecture. It took some correspondence with a former lecturer to pinpoint the date and location of this, as all internet sources pointed to a completely different interpretation. Much as Leeds Beckett’s history is intertwined with other institutions, either those which have eventually been absorbed or gone their separate ways, it is fascinating how myth, memory and the interpretation of history can lead to widely held misunderstandings. Just as Henry Moore’s place within the history of our University should rightly and justifiably be celebrated, King Kong’s legacy to the residents of those towns and cities which he graced deserves to be told accurately. Merely aping the history which has been told to us over the years does not necessarily lead to the truth.

James has worked in the libraries at Leeds Beckett University since 1997. From starting as a library assistant he has moved between the Headingley and City campuses over the years in a variety of roles. He is currently an Information Services Librarian with responsibilities for supporting the Library Management System. In his spare time James likes to write and contribute to a number of blogs on a wide variety of subjects, including lesser known aspects of Leeds history.