Budget 2014 Reaction: Inequality and the Politics of Budgeting

Budget 2014 Reaction: Inequality and the Politics of Budgeting

As I said when we launched our Global Inequalities programme last month inequality in Britain rose rapidly over the 1980s and 1990s.  Though inequality stabilised from the mid 1990s-mid 2000s, it then started rising again up until the recession, but as a result of the recession some interesting things happened.  Inequality fell slightly.  This was mainly because the incomes of the very wealthy were disproportionately hit by financial collapses and because the welfare and progressive taxation system worked well in tandem to protect the poorest households from the worst effects.

George Osborne today claimed credit for this, but this is misleading. There is a lag in the data on inequality, but we can expect that the cumulative effects of previous budgets to lead to increases in inequality once again.

That brings us to today’s budget.  The headline measures were some small but significant changes to personal tax allowances for both the basic and the higher rate, details of the long awaited benefits cap and changes to the taxation of pensions and savings.  The cumulative effect of the changes to taxation are likely to benefit higher earners, as this IPPR infographic shows. 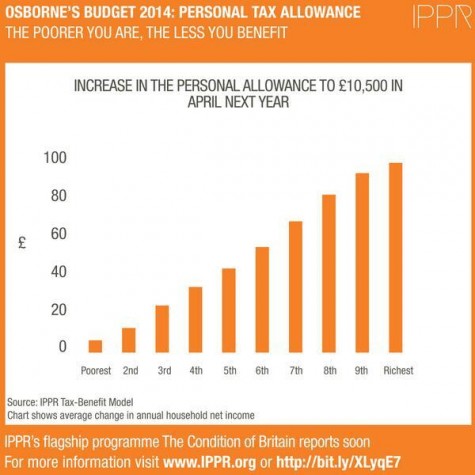 Image courtesy of the IPPR

Changes to savings of up to £15,000 a year are really good news for savers, but you have to have a significant income to save what is more than 50% of the average salary.  The Welfare cap will limit spending on benefits into the future and are part of the plan to ‘lock-in’ spending cuts over the long-term.

The chart below from the distributional analysis that accompanied the budget shows the overall impact of changes since 2010.  It shows a complicated set of changes but that upper middle income earners have done best – or least worst, since all households have been negatively effected.  Even measures that look like they might help poorer families – such as the childcare allowances introduced today, will benefit relatively well off families the most, as Mike Wragg’s comment on our Politics and Applied Global Ethics blog yesterday showed. 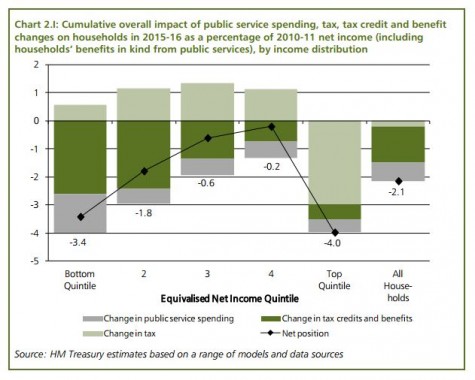 Image courtesy of the distributional analysis accompanying the budget, available to view in full here.

The politics of budgeting

Budgets are always political.  Chancellors like it when they can hide behind ‘economic science’ but in reality economics, to borrow Robert Cox’s famous and pithy phrase, is‘always for someone and for some purpose’.  So ultimately budgets are always about who wins and who loses.  Immediately before a General Election the suspicion is always that the Chancellor of the day will use tax and spend giveaways to secure votes.

With this Budget the Chancellor’s wiggle room for giveways was severely limited by a lack of growth.  The Coalition has banked it all on austerity working, and up until recently they have had little positive evidence to point to.

This time the Chancellor, as expected, made much of a recent return to growth.  But despite upward revisions to the OBR’s forecasts of growth, there continues to be concern among economists that we are seeing cyclical rather than structural growth and alongside a still growing national debt, we all thought that this would mean he had very little capacity for giveaways.

However, the surprise reforms of savings and pensions were precisely that.  Look at who benefits from this and you’ll see the Tory party’s election targets emerge.  Pensioners and savers are precisely the group of Tory voters who might currently be tempted by UKIP.  So even in difficult times, the Chancellor found room to play electioneering with the budget.  Add into the equation that pensioners were much more likely to vote than young people at the last election, and the pre-election politics become even clearer. 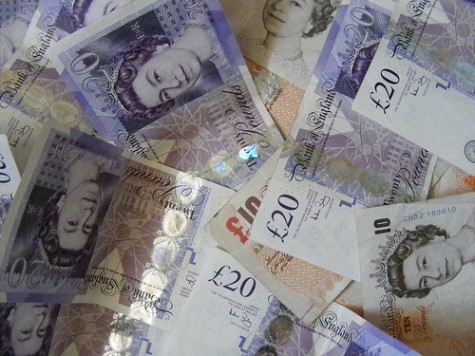 But the more interesting politics of this Budget were around how the Chancellor sought to use it to shape the political debate not just before, but after the election.  We got a continuation of the attempt to split the ‘working class’ along the lines of deserving and undeserving.  I counted more than one mention of the now fabled ‘hard working family’, who were targeted by measures on childcare and personal tax allowances, and savings too if they are wealthy enough.  This group are set against those on benefits who will be most affected the cost of continuing welfare and public spending cuts.

The design of the Welfare Cap though, and the talk of rules around public spending to return to surplus, also lock-in some of that debate into the longer-term.  Alongside the changes already implemented to how benefits are uprated each year and the fact that more than half of the public spending cuts planned to return fiscal policy to a surplus by 2018-19 are yet to come into force, with many of them are scheduled for after the election this is a serious attempt to constrain post-election politics too.  All this can be seen as a broader attempt to limit public spending through establishing rules which benefit some interests over others – what Stephen Gill has called ‘new constitutionalism’.

Poly Toynbee this week warned that any government would find it hard to stick to the spending commitments scheduled for after the election because of the effect of this on public services and the likely failures and public reaction they would cause.  The Chancellor knows that it plays into his own hands to continue to promise austerity and it lays down the gauntlet to Labour who then have to choose between committing to honouring potentially damaging cuts or risk being portrayed once again as fiscally irresponsible.