Muscle mass makes up about three quarters of men and two thirds of women. The main engine behind movement, it also consumes much of our fuel. Without muscle, we can’t move and without movement we have little use for fuel only to store it.

The ultimate consequences of poor muscle health with aging are a loss of independence, quality of life and diseases such as diabetes.

The University of Limerick Healthy Ageing study sought to assess the muscle health of ~200 healthy 50 -70y adults. The purpose of this was to determine what was happening to muscle health before it became a problem and what would happen to muscle with appropriate dietary protein intake and exercise combined.

It started with a review of literature recently published in Biogerontology. The review told us that muscle in the arms and legs was prone to change with age and most relevant to carrying out activities of daily living. 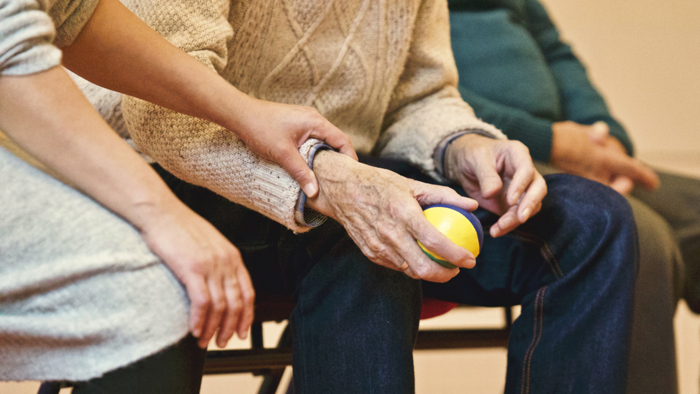 Our first study, published in the Journal of Clinical Physiology and Functional Imaging, assessed muscle mass and lower leg strength. It told us that muscle mass and strength was particularly affected in the thigh region. The strength of the muscles used to kick a ball (the quadriceps) were particularly affected with aging. We suggest the reason for this is that this is the region where we have most muscle but also these are the muscles used to climb stairs and rise from chairs. It is possible that a decline in physical activity or exercise hastens the change with aging at these regions.

In addition to strength, we found that the speed of muscle contraction was lower with ageing in a study published in the journal ‘Advances in Skeletal Muscle Function Assessment’. This may be relevant in situations where somebody has tripped and is trying to regain balance.

The next challenge was to measure our adult’s ability to perform everyday activities such rising from a chair and walking. We started by using basic tests used with frail adults such a 10-meter walk test. However, in a study published in the Journal of Geriatric Physical Therapy we found that these tests could not detect changes due to ageing in healthy adults. To test our adults further we got them to perform as many chair rises as possible in a 30-second time period and to complete 900m as fast as they could. This did the trick as we could clearly see the difference between adults in their 50’s and adults in their 60’s.

To bring the picture of our adults muscle health together we then had to see whether their muscle mass, muscle strength or a combination of muscle mass and strength known as muscle quality were related to their performance in the everyday tasks. In a study published in the Brazilian Journal of Physical Therapy we found that the strength of the muscles used to kick a ball had the greatest association with better ability to rise from a chair and complete 900m.

At this point we knew that muscle mass, strength, quality and the ability to perform everyday tasks were impaired with ageing. We then sought to determine the effect on muscle health of exercise three mornings a week combined with an increase in dietary protein intake. In a female only study published in Biogerontology, one group were given a protein supplement only and the other a protein supplement plus exercise. Everyday exercises such as squats and lunges were used and made more difficult by pushing against a resistance band known as a theraband. The protein only group did not see a change in any of their markers of muscle health but the exercise group increased muscle, mass, strength and quality at the thigh region and on average were 20-seconds quicker over 900m. In fact, the changes seen in many cases were over half the entire difference seen between those in their 50’s and those in their 60’s at the beginning of the study.

In conclusion, we find what Francis Fuller reported in 1705 to be true, particularly in the legs, “If some of the benefits accruing from regular exercise could be procured by medicine, then nothing in the world would be held in more esteem than that medicine”.

Dr Francis is a former Senior Lecturer in Sport, Health and Rehabilitation Science at Leeds Beckett.