In the second of our blogs to mark National Obesity Awareness Week, James Nobles and Professor Paul Gately from Leeds Beckett University and Carol Weir from MoreLife discuss the lack of funding for weight management services
Written By
Whole Systems Obesity Project

Given that two in three adults and one in three young people have overweight or obesity1, you may be led to believe that plentiful support is available for people wanting to improve their weight. If that was your assumption, then unfortunately, you would be incorrect.

Whilst the four-tiered approach may sound seamless and comprehensive, very few of these services are provided. Public Health England3 released a report in 2015 which found that 61% of councils offer a tier two programme for adults, and only 56% for children. But when looking at tier three, only 5% of clinical commissioning groups (i.e. NHS) had an adult service and approximately 2% had a children’s service. Such figures present the stark reality of how few weight management services are provided.

As you might therefore expect, the funding for services has also decreased over time. In a recent paper4, we found that the average funding per participant attending MoreLife (a UK weight management provider) had decreased by 37.5% between 2009-2011 and then 2012-2014.

Only £102 million (See figure below for % spend of Public Health Grant) was spent on adult and children’s weight management services across all 152 local authorities in 20165, negligible when compared to the £767 million on substance misuse and £631 million on sexual health services. And as for smoking, which an estimated 15.5% of the population currently do, £111 million was provided for smoking cessation programmes in 2016.

This limited funding comes despite the UK having 3 million children and 35 million adults with a weight issue, highlighting the disproportionate funding across the UK health systems. This second figure below also illustrates the estimated annual, direct and indirect, costs of various public health issues; as seen, obesity is thought to have the greatest impact on the NHS and the wider society. 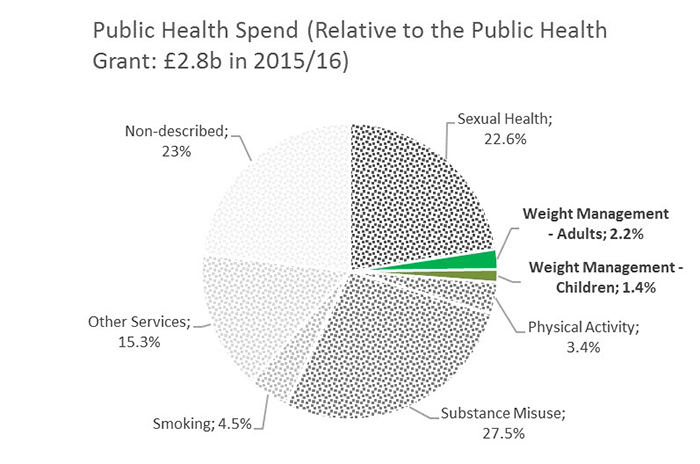 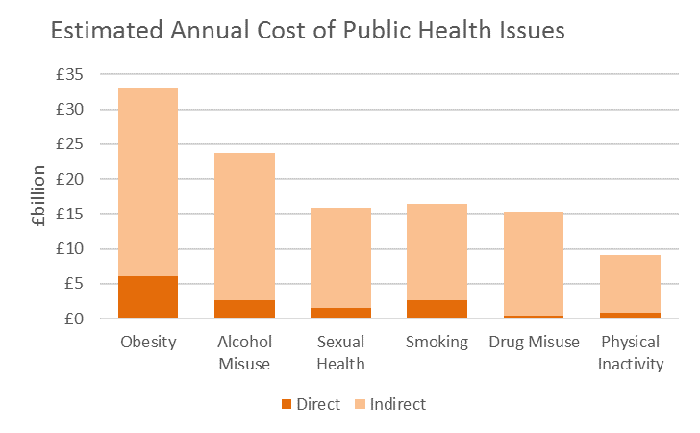 So why might this be the case? Well, there are a number of factors to consider here. Firstly, the tackling of obesity – especially for local authorities – is not mandatory, they do not have to spend money on obesity. But this is also the case for substance misuse which receives seven times more funding than weight management services.

Another reason may be more political. Studies have found that the viewpoints of elected members, the public interest and attitudes, and the understanding of a health issue are more likely to drive policy making and commissioning rather than the evidence base6,7. Will a politician receive more votes by investing money in public health services or in local infrastructure? What are their perceptions and beliefs towards people with obesity? Questions like these will influence local authority expenditure.

Because of all the factors listed above, we have been working with SHINE Health Academy (a voluntary sector weight management provider in Sheffield) to call for action on obesity. We firmly believe that weight management services must receive adequate funding so that individuals are supported as and when needed. A link to the petition is available here: petition.parliament.uk/petitions/205447. Only with sufficient Government funding will we be able to effectively help those individuals requiring support.