Dance academic and choreographer Beth Cassani (Leeds Beckett University) has collaborated with Joseph Mercier (NSCD and Panic Lab) to make a new full-length touring show. The Faun Project premiered at the SLAP Festival of Contemporary Performance at York Theatre Royal at the end of February. 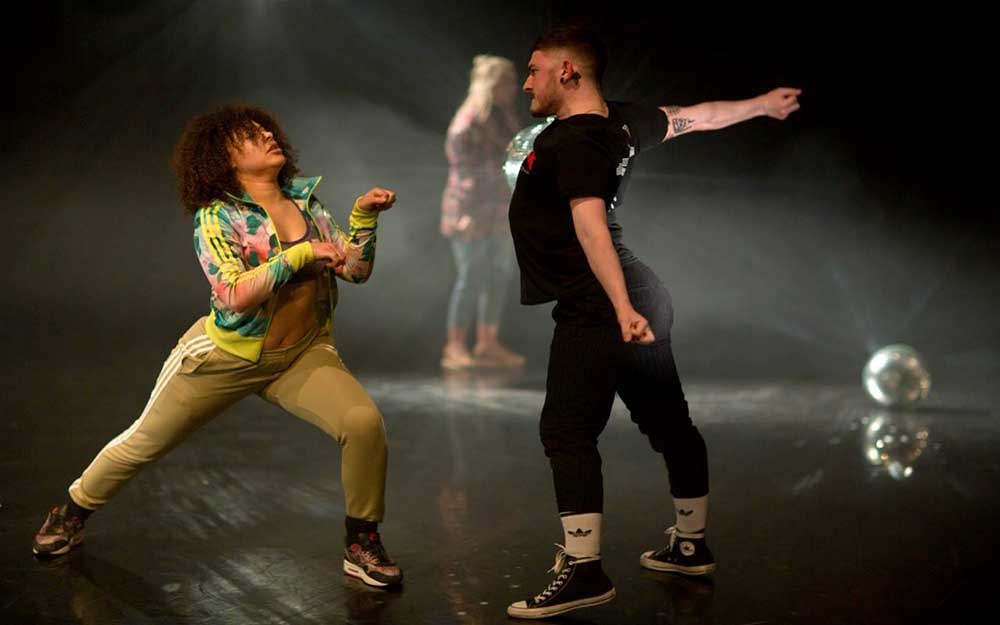 A club in the afternoon, after a long night out, and the fauns are still going. This choreographic process is a conversation between millennials and their predecessors. Using the ‘faun’ as a creature of becomings, transformations and halves this project explores youth subcultural politics, aesthetics and bodies.

We’ve been developingThe Faun Project since 2017. The work, choreographed by Beth Cassani and Joseph Mercier is born out of a process of research and experimentation in collaboration with a group of millennials and sound designer Dinah Mullen. The dancers perform movement and text that slithers between apathy, political awareness and frenzied, sometimes futile, hedonistic energy that captures the chat around different experiences of contemporary culture. ‘Somewhere between a sweat soaked nightclub and a mythical forest’, the choreography, performed amongst disco balls on fake grass, proposes a movement and visual language that expresses bodies as transformative works in progress.

The performers are all graduates from Leeds Beckett BA Dance degree. They are all now performing professionally alongside pursuing an MA in Choreography here at the University (Liam Morgan and Alexah Tomey-Alleyne) and an MSc in Physical Activity and Health (Holly Clemitshaw) and teaching (Maddison Stevenson). The project has received Arts Council England funding and was supported with residency space by Yorkshire Dance where an early version of the work-in-progress was performed last year. The work is also performed in a short version and will tour with Duckie to Latitude Festival and Hebden Bridge Arts Festival this summer, and to an International European Theatre Meeting (IETM) in Leeds this month. Beth Cassani and Joseph Mercier hope to continue this choreographic research.