Louis Le Prince and the Birth of Film in Leeds 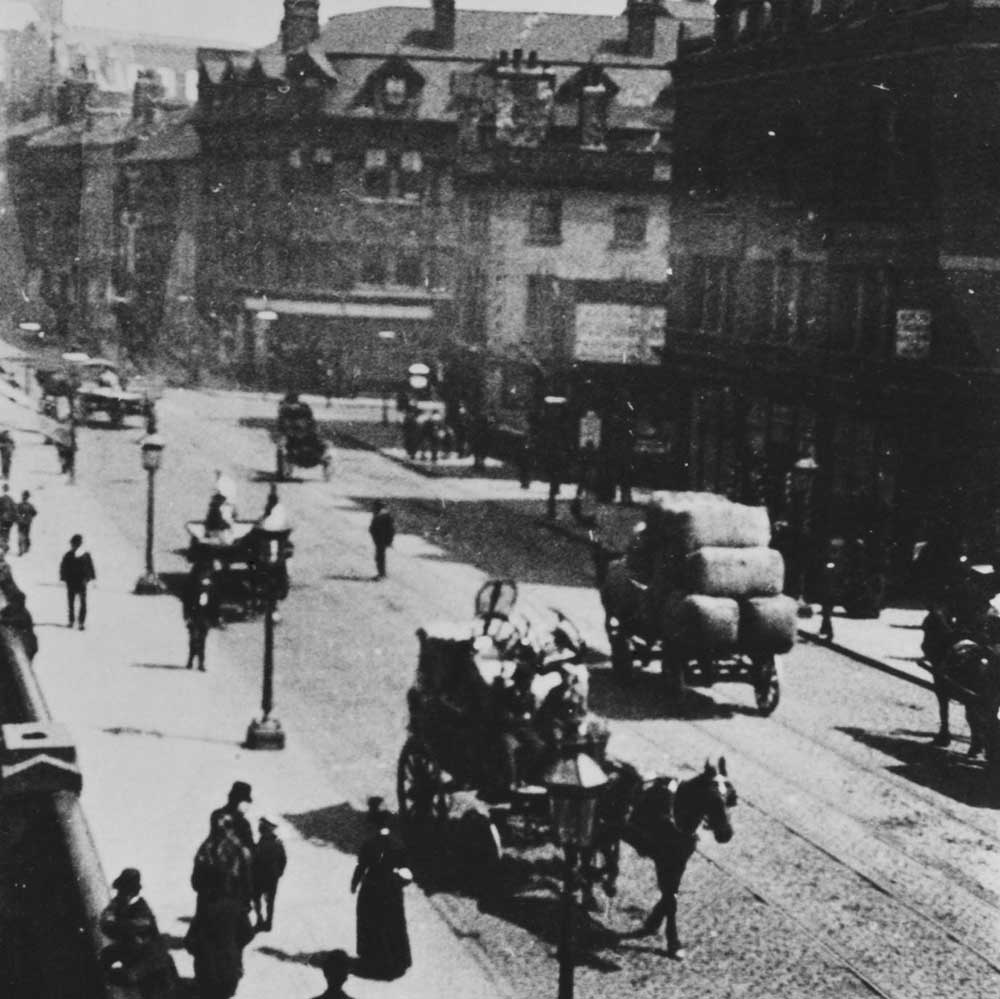 In the city of Leeds in 1888, Louis Aimé Augustin Le Prince shot what many people now believe to be the world’s first films, capturing continuous movement and framing it with an artist’s eye. During his lifetime, however, the world never got to know about the work he had made, for on 16 September 1890, and just before he was expected to travel to New York to demonstrate his invention in public for the first time, he boarded a train from Dijon to Paris and was never seen or heard from again.

Louis Le Prince was born in Metz, France in 1841 and came to Leeds in 1866. He worked at a local brass foundry; taught art and practised photography in the town; married and started a family there; and involved himself in Leeds’ artistic and intellectual circles.

In 1881 he accompanied his brother-in-law, John Whitley, to New York on a short-lived business venture and, after it had ended, stayed on in the city where he started designing a multi-lens ‘apparatus for producing animated photographic pictures’.

In 1886, Le Prince applied for a US patent for the device and in 1887 he crossed the Atlantic again to continue his work in Leeds and Paris; that year he shot fourteen frames (slightly out of sequence as the multi-lens shutters had misfired) onto a single glass plate.

At some point, Le Prince turned from the multi-lens to a single lens camera, exposing onto a long strip of sensitised paper (effectively, a roll of film) and, back in Leeds in 1888, shot the films on which his reputation rests.

The Roundhay Garden Scene, shot in October 1888, was filmed on the grounds of Roundhay Cottage, his father-in-law’s house. The surviving footage feels like a charming and loosely choreographed piece in which Le Prince’s mother-in-law, Sarah Whitley, and a family friend, Annie Hartley, shuffle about, amused but self-conscious, while Le Prince’s eldest son, Adolphe, and his father-in-law, Joseph Whitley, playfully circle them, treading paths that seem carefully designed to keep everyone within shot at all times.

Also filmed at Roundhay Cottage was a sequence showing Adolphe sidestepping elegantly whilst playing an accordion, while a third film showed traffic moving across Leeds Bridge, the bridge itself cutting an attractive diagonal line through the frame. Other subjects believed to have been filmed include a white horse in Roundhay, trains in Holbeck, and a panorama[1] scene shot in a theatre close to Le Prince’s workshop at 160 Woodhouse Lane. 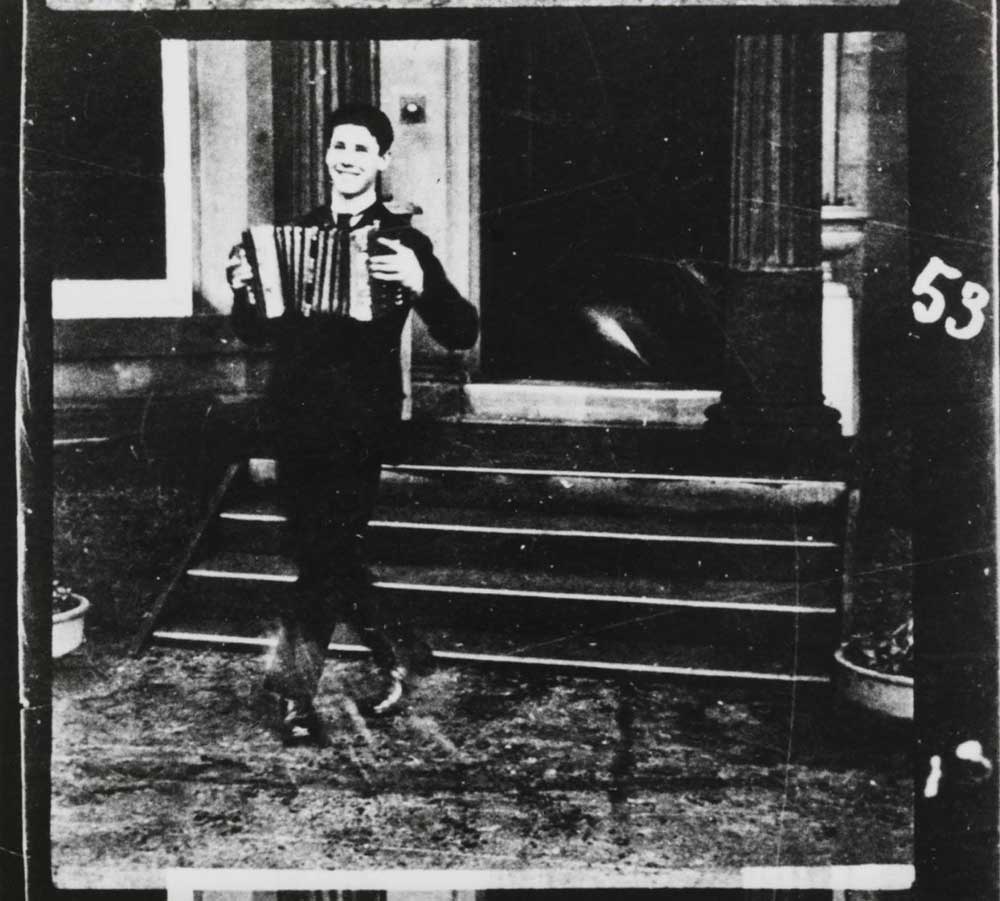 Le Prince worked obsessively on his inventions, in secret and at various locations across Leeds, struggling mainly with the projection of his images. At some point, however, he arranged to travel back to New York where he was expected to demonstrate his machines.

In 1890, and just before sailing to the States, Le Prince went on a trip to France with friends, and while there visited his brother, Albert, in Dijon. According to Albert, Le Prince boarded the Dijon to Paris train on 16 September 1890. However, Le Prince was never seen again, creating, by his absence, one of the great Victorian mysteries.

If a film is made but never shown, is it a film? Historians’ uncertainty over whether Le Prince’s sequences were ever played back in his lifetime has discouraged full-throated championing of his work. However, recent research has uncovered evidence of Le Prince’s occasional, hard-won successes. Many of those who knew Le Prince provided clear-eyed informal testimony that often acknowledged his many problems with projection but also described the images which were indeed thrown several times onto a white sheet hung up as a screen in the workshop. Examples of such testimony include woodworker William Mason’s assertion that Le Prince’s films were “not shown more than two or three times, because mainly from the fact that the electric power was too weak”, which simultaneously suggests success and failure - success for Le Prince as an inventor, capturing and projecting back continuous movement for the first time, and failure as a businessman trying to produce a reliable product that could make enough money to save his, by then, debt-ridden family.

Louis Le Prince worked in earnest – and in secret – trying desperately to perfect his machines and although he was often described by those who knew him as calm and considerate, courteous and even reticent, he nevertheless seemed to come alive in those moments when he and his assistants wrestled with the projector and struggled with the electric power supply to the projector’s lights.

These lights were arc lamps powered by a Crompton dynamo which was in turn powered by a Robey semi-portable steam engine (steam-powered film!) The dynamo and engine were housed a few doors down at 150 Woodhouse Lane and connected to the projector by a cable which had been laid across the tops of the intervening workshops. One of Le Prince’s assistants, Fred Mason, who operated the dynamo and steam engine, told of one experience:

"I was enthusiastically driving the dynamo for the powerful arc light fitted up by Mr. Scott when Mr. Le Prince sent round to say he must have a more brilliant light immediately. As the only available means of getting this quickly, I disconnected the governor and loaded the safety valve of the boiler in order to get more speed on the dynamo - thus I suppose risking my life in the cause of the pictures - one does this kind of thing when one is twenty."

Mason wasn’t exaggerating. Disabling the governor (the mechanism which regulates the engine’s speed) allowed the Robey to run faster and hotter than it was meant to, which risked creating too much pressure inside it. ‘Loading’ the safety-valve (Mason put weights on it) meant that it could not open to release pressure when it became dangerously high. In other words, in order to get as much power as possible to the arc lamps, Le Prince’s team ran a steam engine so recklessly that they risked an explosion.

Despite Le Prince’s struggles and setbacks, we have been left with ample evidence of his achievements: a multi-lens and a single-lens camera, both held by the National Science and Media Museum in Bradford; US, UK and several European patents for the multi-lens camera (and images from the misfiring sequence in Paris); testimony from assistants on the quality of the projected images taken by the single-lens camera; and surviving sequential images from three of Le Prince’s ‘films’, adding up to just a few tantalising seconds of viewable material (as well as newly-discovered, additional frames belonging to the Roundhay Garden and Leeds Bridge scenes, demonstrating that they were originally significantly longer).

Broadcasting Place, home to many courses in Leeds School of Arts, now stands on the site of Le Prince's workshop

It seems fitting that the site of Le Prince’s old workshop lies directly within the footprint of Broadcasting Place, now occupied by Leeds Beckett University, which displays both a blue memorial plaque to Le Prince and a rather more decorative commemorative plaque first unveiled in 1930. The latter was paid for by the citizens of Leeds and until recently was cared for by the National Science and Media Museum in Bradford. It was restored to its rightful place during the celebration of Le Prince in 2018 which included the first Experimental Film Lecture given by the distinguished contemporary filmmaker, John Smith. Perhaps the ghosts of the inventor and his loyal assistants, who went to such extraordinary lengths “in the cause of the pictures", will infuse the work being done there by student filmmakers today.

[1] Panoramas were huge painted canvases, often of landscapes or battle scenes, designed to make an audience feel as if they were actually there in the open air as opposed to in a theatre. It was a giant optical spectacle popular in the nineteenth century.

Irfan Shah is a Leeds based writier and expert on the life and work of Louis Le Prince. You can follow Irfan @TheShadowTraps.