29 January 2016
We are celebrating LGBTQ* History Month very actively this February. All events are open to staff and students and have been organised collaboratively by our Students’ Union, our Rainbow Rose Forum, and our Equality & Diversity Team.

Our University has once again been named in Stonewall’s list of the top 100 gay-friendly employers in the UK. We were placed at number 64 this year and a number of other education organisations have joined Leeds Beckett in the table – 13 of the top 100 are now universities.

In recognition of LGBTQ* month, throughout February we will have an important symbol on each campus: A rainbow flag will fly over the James Graham and Portland, usually purple, will be coloured pink. Walk down from Portland to Millennium Square and you’ll see that we have coverage of the month’s activities on The Big Screen, and tweets from our Rainbow Rose twitter account. We will also be covering the launch on Snapchat.

Waiting for the rainbow flag to go up for LGBTQ* History Month! Add leedsbeckett on Snapchat to follow our launch. pic.twitter.com/CEf3PLl0JL

Our Libraries’ Spotify account will feature a playlist, with tunes by our favourite LGBTQ* artists or icons, or LGBTQ*-themed anthems and songs. Finally, keep an eye out on Facebook for a new Rainbow Rose Forum group. We also have book displays, research by Leeds Beckett staff and more highlighted by the Library for LGBTQ* History Month.

Our Stonewall Account Manager will be here on 24 February, 15:00-16:00, 310 Calverley, City Campus to provide detailed feedback on our Workplace Equality Index (WEI) outcome (position 64 in the Top 100 Employers). Staff and students are welcome to attend. Our Students’ Union completed the WEI for the first time in 2016 and were the only Students’ Union who entered, and will be receiving feedback in the same session.

Andrew Disbury, Senior Champion and Chair of our Rainbow Rose Forum, said: “For me, LGBTQ* History Month is a clear symbol of our commitment to inclusion of all students and staff, as well as a commitment to everyone being the best they can be. I’m delighted that the Leeds Beckett Students’ Union has invited Stephanie Hirst back to our University to launch LGBTQ* History Month. We have a lot of activities running right up until 29 February, which I hope students and staff will join in with and enjoy. Our University has just retained a position in the Stonewall Top 100 Employers for the second time this year, which is fantastic.  I hope February will be a month of celebration of what has been achieved, and reflection on what has still to be done in order to make the world a safe in which LGBTQ* people thrive.” 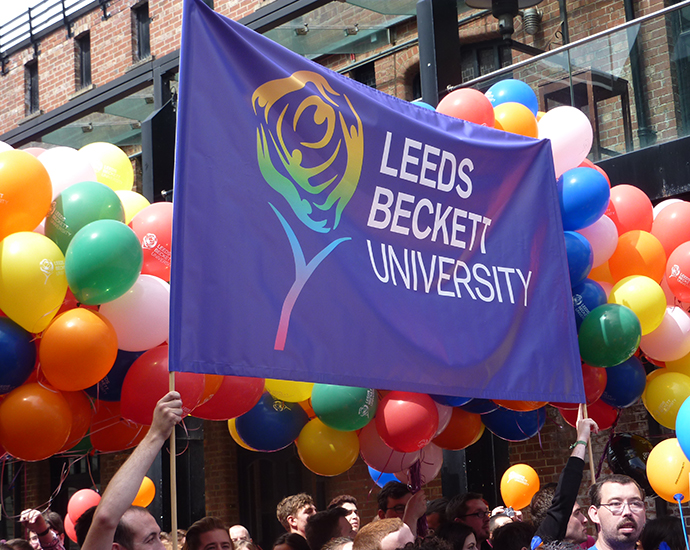 In Conversation with Stephanie Hirst

There will be lots of events too, through February and early March, starting with an opening event from our Students’ Union on Monday 1 February at 17:00 in Lecture Theatre 3, Woodhouse, City Campus, hosted by LGBTQ* Rep Alix Doran, who welcomed BBC Radio Manchester DJ, Stephanie Hirst. Formerly known as Capital Breakfast Show host Simon Hirst, Stephanie, who has known for most of her life that she was a woman, talked about her experience from growing up all the way through to the present day.

For those who like brightly coloured beverages, ‘Pink Drinks’ is after-work drinks open to staff and students on 5 February at 16:00 in our City Campus Students’ Union Bar.

Film buffs may be interested in celebrating the start of the Chinese Year of the Monkey with a screening of Ang Lee's ‘The Wedding Banquet’, on 8 February, 17:00-19:00, Lecture Theatre D, Rose Bowl, City Campus. This film is also part of our University's International Social Network programme. Combining LGBTQ* and international events has been described by our Stonewall Account Manager as “an amazing piece of best practice”.

Professor Alison Oram will discuss some well-known heritage sites and in what ways the historic environment looks different if we add LGBT history back into it in her talk on 10 February, 12:30-13:30, Albert Room, Leeds Town Hall.

Claiming our Histories: Lesbian, Working Class and Poor - Reflections on the Life of Paddy Dunkley

Colleagues from our Faculty Health & Social Sciences are hosting a discussion on 17 February, Lecture Theatre, Woodhouse at 15:00, ranging around intersectionality, invisibilities and how we can write our own stories.

Join a lunchtime walk on 18 February to celebrate LGBTQ* Heritage in Leeds, led by John Hamilton, our Head of Safety, Health & Wellbeing, using a map route plotted by the LGBTQ* community that can be viewed on the Historic England website.

Meet under the horse sculpture in Trinity Leeds city shopping centre at 12:00- A group will leave from Rose Bowl, City Campus and will set off from outside Tiki at 11:45. Contact John Hamilton - j.hamilton@leedsbeckett.ac.uk for details.

On Friday 19 February, 16:30-17:30, 106/107 (SU Meeting Rooms) Portland, City Campus, a panel with members of the Trans and Bi communities will discuss their personal experiences of being LGBT, their sexuality and gender identity, broaching on this year’s LGBTQ* History Month’s theme ‘Religion, Belief and Philosophy'.

On Tuesday 23 February, 16:00-18:00, 539 Rose Bowl, City Campus, Anthony Drummond will talk about the canteen culture of policing and the stigmatisation that still exists in training on awareness of groups such as LGBTQ* communities and on Gypsies. Anthony carried out his doctoral work with Gypsy and Traveller communities, and will be discussing how awareness training for the police has changed over time, giving an historical view of the treatment of marginalised groups from the 1920s to the present day.

29 February, 12:00-14:00, 201 Broadcasting Place, City Campus, will give an opportunity for the LGBTQ* Forum to meet with colleagues from our other forums - Carers, Disability, Faith, Gender and Race - and celebrate the coming to a close of LGBTQ* History Month.

Older Lesbians Talking about our Generation

LGBTQ* History Month will end with a symposium on 5 March, 10:00-17:00, Lecture Theatre E, Rose Bowl, City Campus organised by our Faculty of Health & Social Sciences colleagues. The aim of the day is to provide a discussion space for older lesbians to reflect on research studies that have recently captured the lives and lived experiences of older lesbians. Intended audience: anyone who self-identifies as an older lesbian. Book here.

LGBTQ* History Month is celebrated in February in the UK. In 2016, our theme is Religion, Belief and Philosophy. In 2017, we will look at citizenship, personal, social, health and economic (PSHE) education and law as we mark the 50th anniversary of the partial decriminalisation of male homosexuality in England and Wales. Read more here about LGBTQ* History Month.