The 30:30 Wristband Challenge, run by the Carnegie School of Education, helps primary and secondary schools boost motivation for physical activity of their pupils and staff.

Those taking part can achieve bronze, silver and gold wristbands by signing up for at least 30 minutes of daily activity.

Alongside the city’s Lord Mayor, Councillor Graham Latty, Paul presented special awards to two Guiseley Primary pupils who had been nominated by their school for their dedication to the 30:30 Wristband Challenge.

Following their involvement with the challenge, schools were asked to complete an on-line survey, sharing which of their pupils had done particularly well to achieve any level, had influenced others or had overcome particular challenges to increase their physical activity levels.

Paul said: “It was a great honour and privilege to be involved in the Health & Wellbeing Service Celebration and it was great to see support from the Lord Mayor and a representative from his council.

“The two pupils involved thoroughly deserved their special achievement award for going the extra mile (literally!) and encouraging their families to become more physically active too.

“I look forward to more schools participating in the 30:30 Wristband Challenge, further partnership work with Leeds Active School and the Health & Wellbeing Service, and returning to the Civic Hall Debating Chambers next year, to recognise more pupils for their outstanding efforts.”

Paul was asked to the service as part of the university’s partnership with the newly-formed Leeds Active Schools and Leeds Healthy & Wellbeing Service.

During the Civic Hall ceremony, awards were also handed out to schools achieving Healthy School status, Mindmate Champions and Investors in Pupils.

The 30:30 Wristband Challenge now has nearly 6,000 participants and is gaining interest locally and nationally. The high school and staff version has recently launched to encourage school pupils of all ages to participate.

Professor Damien Page, Dean of the Carnegie School of Education, said: “As one of the leading Schools of Education in the UK, we’re committed to working to improve the life chances of children inside and outside of the classroom.

“The 30:30 Wristband Challenge is a vital way of boosting not just the physical health of young people but their mental wellbeing as well to make sure they make the best of their abilities.” 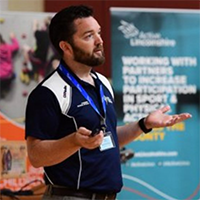