The award-winning film maker gave a guest lecture to students in the School of Film, Music and Performing Arts at Leeds Beckett on Wednesday 11 October, where he discussed some of his hard hitting and often controversial work over the last decade, including the highly acclaimed BBC drama, Wolf Hall and his confrontational trilogy for Channel 4, The Government Inspector, Britz and, most recently, The State.

Peter began his career in Current Affairs for the BBC, quickly progressing to directing documentary for Yorkshire Television and then drama for Meridian Broadcasting/ITV, the BBC and Channel 4. He has also worked in Hollywood directing feature films White Oleander and Wuthering Heights.

He is recognised for his meticulous research on his subjects and his extraordinary ability to confront his audience with challenging and often shocking material whilst also asking us to empathise with his characters and the complexity of their situations. Authenticity, truth and understanding are at the centre of his work.

Andrew Fryer, Dean of the School of Film, Music and Performing Arts at Leeds Beckett, said: “Peter was truly inspirational and it was a privilege to hear him discuss his unique approach to production design and storyboarding as well as the editing and sound design process. Referring to his historical drama, Wolf Hall, and his discussions with the writer, Hilary Mantel, he pointed out that 'the characters are part of history and they don't know what is going to happen to them', leading him to shoot the scenes 'as though they are happening now'.

“Peter also gave our students advice on working with actors, in particular how the role of a Director is to 'go on the journey with them'. The statement that made the biggest impression on me was 'These are the darkest times I have known but I believe in the redemptive power of the human spirit', which sums up his overall philosophy of the 'redemptive arc' of storytelling.”

These are the darkest times I have known but I believe in the redemptive power of the human spirit -Peter Kosminsky @NFSFilmTV #Leeds today pic.twitter.com/eU6j0KXH4R

David Lowen, Chair of the Board of Governors at Leeds Beckett, who introduced Peter, said: “It is to the credit of the university and the Northern Film School that as distinguished and busy a director and writer such as Peter Kosminsky will take time to meet our students and talk to them. Those who were there should know they are a privileged few among film and TV students around the UK.

“The students had plenty of chances to ask Peter questions and it was interesting how deeply and carefully he thought about his answers. What our students got was one of the world’s best talking deeply, openly and honestly about film and TV techniques and skills – and his personal motivation - in a way which could only be inspiring.

“Peter and I were at Yorkshire TV 30 years ago – when he was professionally in short trousers still: he’s now the most respected director in television and film. What is remarkable about his career is not just the depth of quality but the breadth also. He is a director and a writer. He has worked in fact and fiction and his fiction is built on fact. He has won awards from the Royal Television Society, BAFTA, the British Film Institute and I am especially proud, as the Honorary Secretary of the RTS, that last year he was awarded the RTS Judges Award for his achievements and Wolf Hall in particular.” 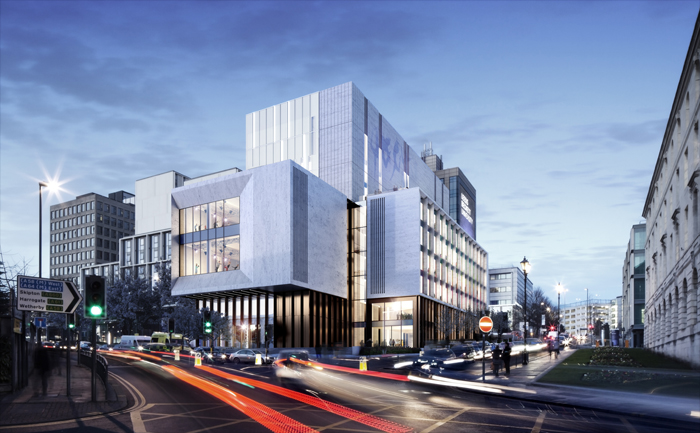 The 14,500 sq m development will provide an iconic home for academic, creative and cultural activities in the civic heart of Leeds, becoming a stand-out landmark site for the Northern Film School, Music, Performing Arts and Fashion students. The project aims to attract new audiences and facilitate dialogue between the University, its partners and the wider city.

The proposed building, designed by Hawkins\Brown in conjunction with development partner Downing Developments will be home to nearly 2,000 students and staff, who are currently spread across various separate locations in the city. Assembling the different courses under one roof will create an inspiring artistic and cultural hub, allowing the University to enhance the transferable skills and employability of their students through bespoke specialist facilities and collaborative social learning spaces.