Education on the agenda at Leeds Beckett conference

Teachers from across the North of England will share their hopes for the future of education at the fourth annual Northern Rocks education conference at Leeds Beckett University. Northern Rocks began in 2014 when a group of like-minded people came together on Twitter to set up a conference by teachers for teachers based in the North of England. The idea gained momentum and all 500 tickets for the first conference were quickly sold out: each event since then has been oversubscribed. Every year, teachers from the North of England and beyond attend Northern Rocks, which calls for teachers to reclaim their profession and reaffirm their commitment to the principle that education exists to make the world a better place and that the future lies in the hands of our young people.

Thirty-two speakers have been confirmed for the 2017 event, which takes place on Saturday 17 June, including General Secretary of the Education Union (ATL), Youth Mayor for Oldham, T Jay Turner, and Editor of Schools Week, Laura McInerney.

School children from London, Bolton and Manchester will also take part in a ‘soapbox’ session, where they will share with the speakers their insights into education, what they hope for in the future, and what they would like to change.

Nick Mitchell, Partnership Development Manager in the Carnegie School of Education at Leeds Beckett, said: “We look forward to hosting Northern Rocks every year. It is one of the most exciting teacher events I have ever been associated with. The energy of the teachers who come, their willingness to challenge authority and their moral purpose in representing the pupils they teach is simply inspirational. We have again assembled a stellar cast of leading national figures in education for Northern Rocks 2017 and it promises to be another unforgettable day.”

Debra Kidd, Co-organiser of Northern Rocks, commented: “We set up Northern Rocks to give teachers in the North the chance to see some of the speakers frequently appearing at London events; but it very rapidly grew into a national event with teachers travelling to it from all over the UK. It’s a chance for 500 professionals to come together and celebrate the best about being a teacher - to get away from some of the negativity and difficulty and see that we can, if we stick together, make a difference. Thanks to Leeds Beckett who jumped in at the first tweet three years ago, with an offer of a venue, we’ve been able to continue what has become a very special event in the calendar for those teachers who want to reclaim pedagogy and remind themselves of why they went into teaching in the first place.”

The event, which will be held at Leeds Beckett’s Headingley Campus, will start with a panel discussion before splitting into workshops led by a variety of speakers. 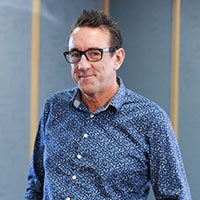