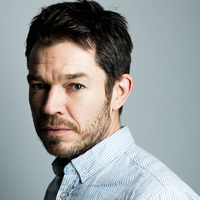 David is a senior lecturer and graphic designer with a wealth of industry experience in branding, art direction, editorial design, illustration, photography, and type design. I have been teaching graphic art and design at Leeds Beckett University since 2008.

David's work is predominantly print-focussed and with an illustrative bias. Much of it incorporates traditional forms of graphic design, but he is also interested in ways of working not normally associated with the role of the graphic designer such as sound, sculpture, moving image, and photography. Whatever the process, however, there’s the tendency for his work to adopt a bold, colourful, geometric, and often brutally reductive aesthetic.

My research is practice-led and ongoing. It is varied and informal. Recent output includes design and art-direction for Backwash Magazine – an independent, bi-annual publication about the sport of surfing. The aim here was to create an uncharacteristically sophisticated approach to this cliché-laden genre. The magazine was launched in late December 2015, went on general release in early 2016 to critical acclaim, and was peer reviewed by figureheads in the world of independent magazine design and publishing.