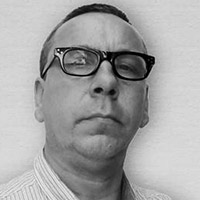 David is a senior lecturer specialising in editing, colour grading and VFX. Before entering film education, David worked around the world as an editor, colourist and VFX artist. During his career, he has worked with all the major broadcasters, including the BBC, ITV, Channel Four and Sky, doing feature editing as well as working on documentaries, promotions, title sequences and on-air graphics.

He has also worked on a wide variety of commercials, feature films and pop promos as a colourist and digital film consultant.

David still works as a colourist and consultant in the film and television industry.