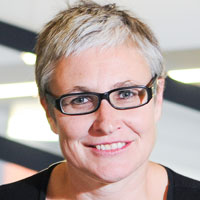 Dr Liz Stirling is a creative practitioner using performance, collaborative production and art activism to explore how we connect with each other. She has performed, published and run projects extensively in the UK including at Tate Britain, Tate Modern Summer School and toured with the British Art Show 8.

Dr Stirling has a collaborative practice, Robinson Stirling, with artist Laura Robinson. They have worked on a range of projects using play and non-verbal communication to engage in unique experiences with people across generations and backgrounds. They use performance employing mask, low-maintenance costumes and recycled materials to understand through humour and embodied experience the meaning of being a human, and other animals.

Robinson Stirling played and performed for two days in the Tate Britain History Galleries and with teachers/art workers at the Tate Modern Summer School in and around the building and exhibitions. They have now set up an arts collective 105 Women with women asylum seekers in Leeds and East Street Arts, developing a sustainable space for learning and sharing creative skills in a safe, equal and social environment.

Dr Stirling is also an Art Doctor with artist Alison McIntyre, specialising in participatory events and workshops, aiming to help break down barriers to participation in contemporary art whilst playfully questioning the idea that art is good for you. The Art Doctors toured with the British Art Show 8 in 2015/2016 and are now continuing this with arts organisations nationally.

Dr Stirling approaches research through practice applying and developing feminist methodologies through each project with an emphasis on equality, collaboration, inclusivity, embodied experience and multiple perspectives. Impact happens at a local level in everyday lives, through public events and published writing, in education and in art environments locally and nationally.

F= believe in the power of art as a platform for social change. It is a unique research space that emphasises core feminist themes of care, connectedness and flexibility in thinking and doing. It is in Donna Haraway's words a 'Refugia', a space for replenishment, growth, safety, to be disruptive in, to feel able to resist and to laugh. F= has shaped the curriculum of Graphic Arts and Design at Leeds Beckett, transformed student experiences, organised public walks and performances for International Women’s Day in Leeds and accompanied these with unconferences, articles and exhibitions.

The 105 Women project is a unique space developing a new model of practice around nurturing, empowering, non-hierarchical organisations using ideas of alternative economies. What is the need and what have we already in our resources? The project is impacting positively on the health and wellbeing of everyone taking part from asylum seekers to cultural workers and sharing practice with related migrant organisations.

Dr Stirling currently supervises seven students across the School of Art, Architecture and Design including; the film essay; mobilising illustration and bricolage; feminist art practices; play, chance and creative beginnings; place and meaning; architecture and pedagogy. She has extensive expertise in practice based art and design PhD's with UK and international students, She has supervised 5 PhD students to completion including creativity in the digital domain; film, performance and place; painting / collage practices on Sri Lankan conflict; autobiography, identity and Armenian history.

Dr Stirling and F= welcome proposals for PhD by Practice in these areas.