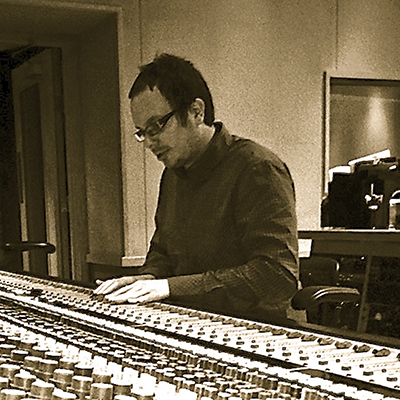 Paul has worked as a professional recording engineer for over 10 years, in and around Liverpool. His work has been played on BBC6 Music, BBC Radio 2, BBC Radio 4 and on independent radio stations across Europe and the USA. Paul has worked with local, national and international artists including Ellen and the Escapades, Stephen Langstaff, Marcus Bonfanti, Lights that Change and Tammy Rochelle. His most recent work includes engineering on ‘Compañeros’, the latest studio album from Ian Prowse for Learpholl Recordings (2015).

He currently teaches music technology in the community, studio production and acoustics on the BSc Music Technology, BSc Audio Engineering and BA Music Production programmes. His doctoral research investigated creativity and collaboration inside the recording studio and his on-going research interests include popular music and audio education, informal music learning practices, creativity and cultural production in popular music. He is a Fellow of the Higher Education Academy, an associate member of the Institute of Acoustics and a member of the Music Producer’s Guild.

Paul's most recent research focuses on creativity in record production using the framework of the creative system (Csikszentmihalyi, 1988, 1997 and 1999; Kerrigan, 2013). Ethnographic methods such as participant-observation, video and sound recording were used to observe the interaction between the performing musicians, the engineer and the record producer as they collaborated during the recording process. This helped to reveal the complex interaction between the participants and the creative system’s main elements during the creative tasks of performing, engineering and producing. Importantly, it helped to show for the first time that this interaction occurred on both an individual level and a group level, and highlighted how a creative-systems approach can be used to gain a more detailed and in-depth understanding of musical creativity more generally.