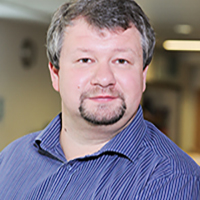 Originally from Belarus, Pavel has worked at Leeds Law School since 2007, first as a lecturer, then as a senior lecturer in law. He teaches both, undergraduate and postgraduate students, around his specialisms in European Union law, company law, international trade and business law.

Before joining Leeds Law School, Pavel has completed a Magister Juris in European and Comparative law with Oxford University in 2002 and a PhD in law with the University of Manchester, having defended his thesis on Free Zones in the Commonwealth of Independent States: a Proposed Regulatory Model in 2009. Pavel has obtained Postgraduate Certificate of Higher Education from Leeds Beckett University in 2010 and is a Higher Education Academy Fellow.

During his time with Leeds Law School Pavel was actively involved in a range of course design and development activities and other administrative duties whilst acting as a course leader for the academic masters programs. Currently he is an academic advisor to undergraduate students on various study levels and supervises master dissertations and doctorate thesis.