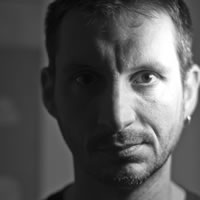 Graham Hibbert is a photographer, filmmaker, designer and developer whose work primarily explores ideas of the abstract in relation to Digital Imaging.

Originally from Belfast, Graham Hibbert lives in Lancaster, and is a Senior Lecture in the Leeds School of Arts at Leeds Beckett University. He has worked as a designer since 1993 in both print and digital media, and explores ideas of abstract imaging within his photographic and moving-image work.

His programming involves online curation and archiving of digital collections, in particular the navigation through web-based systems using ideas from public transport wayfinding.

Graham's current research is centred around an e-portfolio system used extensively within the School of Art Architecture and Design, specialising in an approach that focuses on user-centric design, combined with Information Architecture to create a highly engaging and relevant system.